Jade Goody died tragically young in March of this year, having been diagnosed with cervical cancer in August 2008. She was given the diagnosis while appearing on India's version of Big Brother and immediately returned home to receive treatment. Her life became even more difficult when boyfriend Jack Tweed was sentenced to 18 months in prison in September of that year for assaulting a 16-year-old with a golf club. In February 2009 Jade was given just months to live as her cancer had spread to her bowels, liver and groin. Jack proposed and they married on 22 Feb. in a ceremony that was later broadcast on TV. Jack Straw allowed the groom to waive his curfew so the newlyweds could spend their wedding night together. 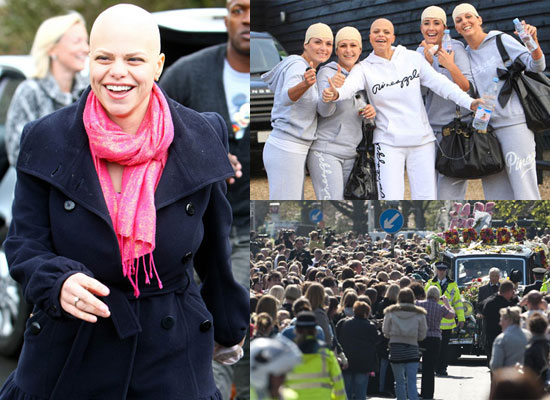 In early March Jade underwent emergency surgery to remove a blockage in her bowel, and the cancer spread to her brain. At the same time, Jack was convicted of assaulting a taxi driver, and just a few days later Jade and her sons Freddie and Bobby were christened at the hospital. Her sight deteriorated and she decided to return home to spend her last days with her family. She died on 22 March, Mother's Day, with her own mother Jackiey by her side. Thousands of mourners lined the procession route on the day of her funeral in April, and a week later Jack was sentenced to twelve weeks in jail for the assault on a taxi driver. We remembered her life in the public eye as tributes poured in. Rest in peace Jade.