Jude Law has had a successful year on the professional front, receiving good reviews for his portrayal of Hamlet on the London stage and on Broadway and with his big screen role in Sherlock Holmes. His personal life, on the other hand, was criticised as various scandals occurred. In July Jude's rep released a statement to confirm he was to become a father following a week-long fling in New York City the previous December with model Samantha Burke. Various rumours circulated over the Summer about DNA tests and assumptions Jude allegedly made about Samantha being on the pill. Baby Sophia was born at the end of September, a week after Jude was cleared of assault charges following an altercation with a female photographer. It was reported Jude would not meet his daughter for three months, and by the end of October Samantha had sold her story and pictures of Sopia to Hello. 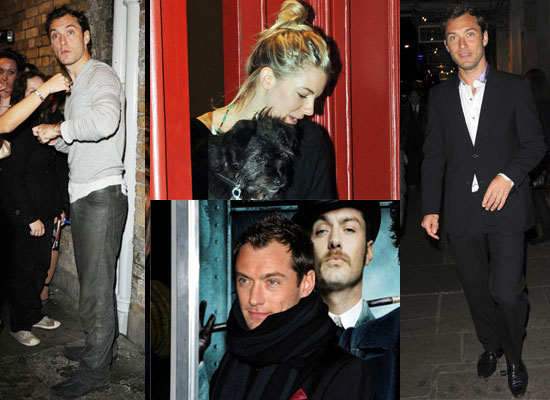 By the end of October, attention moved to Jude's relationship with another ex: Sienna Miller. She was also performing on Broadway throughout the Autumn in Miss Julie with Jude's pal Jonny Lee Miller, and the former couple started to spend time together. Her sister Savannah responded to rumours of a reunion by saying it would be a "completely ridiculous assumption" following Jude's recent conduct, but Jude and Sienna's actions told another story. Sienna was regularly spotted leaving Jude's apartment throughout December, making his buidling's red door a familiar sight to us all, as Jude made a habit of leaving just before or after Sienna. Bringing his personal life even more into the public eye, Jude's ex-wife, Sadie Frost, also revealed she's planning a tell-all book. This all earned Jude a place in my most scandalous celebrity of 2009 poll, and has got me intrigued to see what happens with him in 2010.