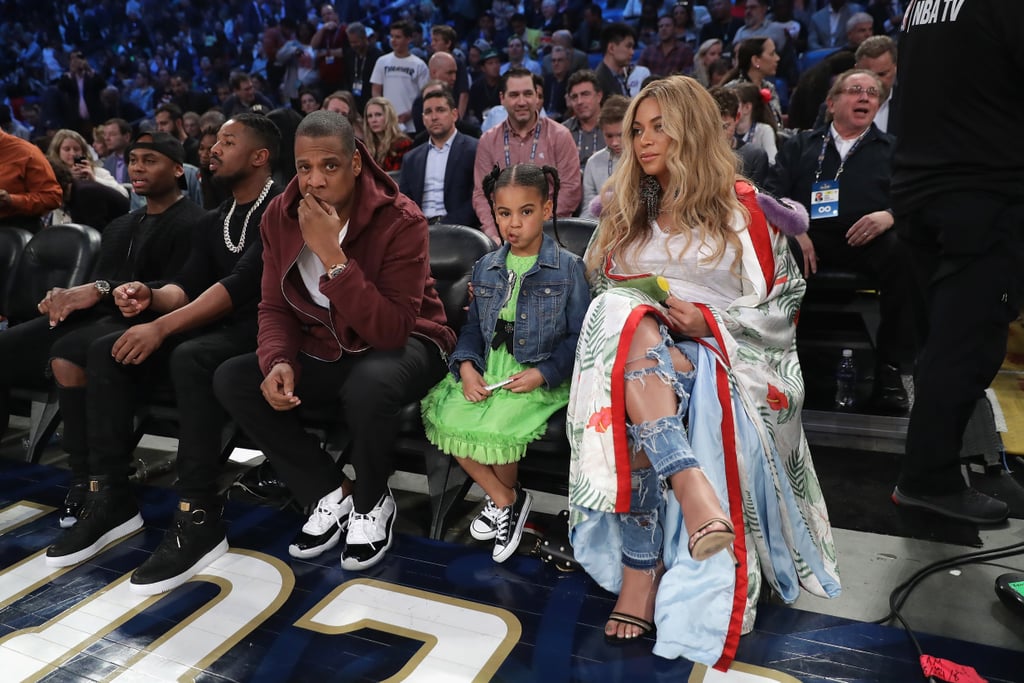 Beyoncé and Jay Z made a family outing with their daughter Blue Ivy on Sunday night. The trio was spotted sitting courtside to check out the NBA All-Star Game in New Orleans and looked to be having a fun time in their front-row seats. Beyoncé covered her growing baby bump in jeans and a floaty kimono while Blue looked equally adorable in a green dress and denim jacket. The noted basketball fans were likely in the building to cheer on their pal LeBron James, who led the Eastern Conference against Warriors stars Stephen Curry and Kevin Durant on the Western Conference. At one point, they shared a sweet moment while being introduced and projected on the big screen. Though Blue seemed a little unimpressed with the game overall — it's not like LeBron is that cool or anything — she did have a lot of fun distractions, eating candyfloss and Skittles, playing with a paper fan, and even getting to meet the mascot.

We got a glimpse of Beyoncé on a casual shopping trip in LA last week before the Knowles-Carter clan jetted off to New Orleans to attend a Saint Heron event hosted by younger sister Solange on Saturday night. Their time in The Big Easy comes nearly a week after Beyoncé made headlines by gracing the Grammys stage with a stunning performance of "Sandcastles" and "Love Drought" and being beat out by Adele for the album of the year award. Despite the loss, she, Jay Z, and Blue all seemed to have a great time at the ceremony and afterparty.