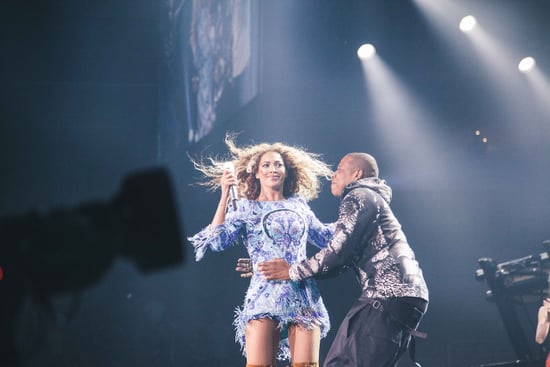 Beyoncé Knowles was shocked to get a surprise smooch from a very big fan in the middle of her Philadelphia concert on Thursday night — her husband Jay Z ran out on stage, threw his arms around her, and gave her a quick kiss on the cheek before disappearing behind the band. Beyoncé seemed taken aback by the sudden PDA, even as the audience and her dancers cheered and laughed. She later posted photos of the hilarious incident on her blog, and a fan video of the sweet moment popped up on YouTube. Beyoncé is well into the first US leg of her Mrs. Carter World Tour, but is also making time to hang with family and friends. She kept a low-profile while attending Jay's Legends of the Summer show in NYC last week, and was able to enjoy some downtime in Miami with daughter Blue Ivy earlier this month. Beyoncé also took to her blog to share photos from her recent trip to Target, including snaps of herself goofing off with friends in the toy aisle and wearing a Batman mask.

See more photos of Jay Z and Beyoncé's surprise onstage PDA, as well as the cute video, when you keep reading.

Source: Beyoncé Knowles
Beyoncé Gets a Quick Onstage Kiss From a Big Fan in Philly  originally posted on POPSUGAR Celebrity News
Around The Web