This year there seemed to be story after story of celeb men's infidelity, from footballers, to musicians to TV personalities. Some couples split, some couples stayed together — here's a closer look at some of the stories. 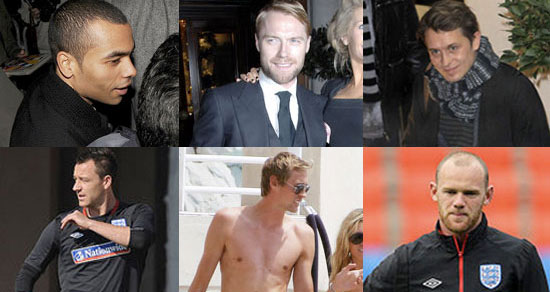 John Terry was the focus of one of the first cheating scandals of the year. Ashley Cole admitted taking naked photos of himself on a pay-as-you-go unregistered phone — the photos then found their way to a glamour model's phone. In May, Cheryl Cole filed for divorce from the footballer. His England teammate Peter Crouch reportedly slept with a prostitute in July, but he and Abbey Clancy worked through it and she revealed she's pregnant a month later. A different prostitute sold her story about Wayne Rooney, saying she slept with him several times while Coleen was pregnant with baby Kai.

Kelly Osbourne and Luke Worrall were on their way to the altar before rumours of his cheating accompanied their split in July. Married father of two Mark Owen shocked us all when he admitted to ten affairs since he got together with his wife Emma five years ago. Ronan Keating temporarily separated from his wife Yvonne after rumours about his relationship with a backing dancer hit the tabloids. Meanwhile, Vernon Kay sent explicit texts to five women behind his wife Tess Daly's back, though the couple worked through the scandal and are still together.

Here's hoping that 2011 gives us stories of celeb couples' solidarity instead of more cheating scandals.