Take That started their year quietly and as a four piece, with Mark, Jason and Howard among the celebs at Gary Barlow's anniversary party. In late January it was announced that they and ex-bandmate Robbie Williams would kind of team up for the Helping Haiti charity single. 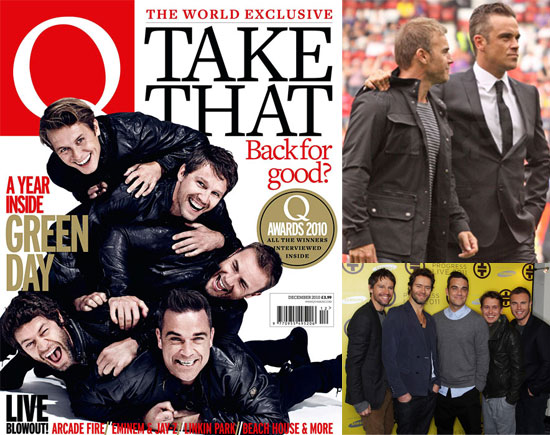 July heralded the time millions of Take That fans had been waiting for, when it was announced that Robbie would rejoin the band and had been working with the rest of the boys since 2009 on a brand new album. Both the band and Robbie made excited statements about the long awaited reunion, 15 years after he left the band in 1995. A short video of the chaps together was released, as they said Rob would be back for an album and rumours of a tour began.

Following Robbie's wedding to Ayda Field, and an appearance together at the Soccer Aid charity football tournament, Robbie and Gary teamed up to release "Shame", a new duet that featured on Robbie's In and Out of Consciousness greatest hits album. They promoted the song together and appeared on chat shows discussing the forthcoming reunion and showing off their rediscovered bromance.

The new five-piece premiered the video of their first single "The Flood" and unveiled their album cover. A cover of a different kind said their reunion was the "biggest story in music this year", and they were inducted into the Q Hall of Fame. They announced their 2011 tour and appeared together to talk about it, before the tickets went on sale and certain sites and the UK telephone network went into meltdown when they were released.

A documentary showing the making of their album Progress aired, and they performed live as five for the first time on The X Factor. The lads celebrated the album going to number one before promoting in Europe and having fun in the snow. They will be performing in Barbados without Robbie on New Year's Eve, and with a sell out tour next Summer, it looks like 2011 is going to be amazing for Take That. I can't wait to see what they get up to!