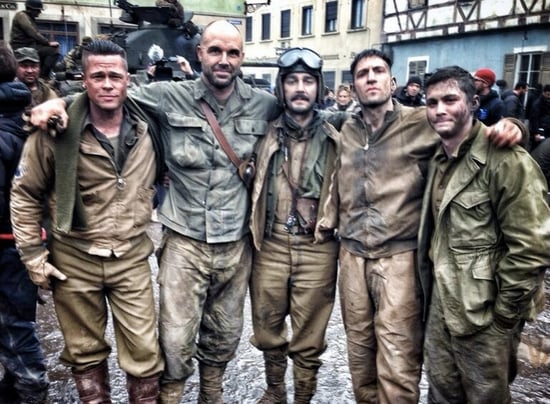 Brad Pitt is getting gritty on the set of Fury in the UK! Director David Ayer gave fans a sneak peek of Brad's portrayal of an American Army sergeant in the final days of World War II in a candid photo he shared on Twitter on Friday with the caption, "Day 56 pic." The snap shows Brad with slicked-black hair and a clean-shaven face. Brad is in good company with four of his castmates, including Shia LaBeouf. The actors wrapped their arms around each other as they showed off their greasy battlefield looks.

Brad recently took a break from production when he joined Angelina Jolie and their children in Australia. The Jolie-Pitts enjoyed a fun-filled day on the open water, taking in the sights of Sydney aboard a yacht, as Brad got behind the lens to take photos of their family outing. It's just one of several sweet moments that landed Brad and Angelina's troop in our favorite celebrity family of 2013 poll — show your support for Brad and Angelina with your vote!