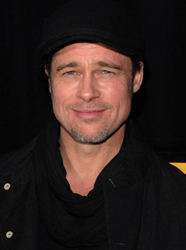 Brad Pitt's latest endeavors are a bit more serious than his latest foray into animation. First, he supposedly has a cameo role in love Angelina Jolie's directorial debut, a Bosnia-set wartime love story. And while his other new project won't put him in front of the camera, it revolves around another foreign affair. Pitt's production company, Plan B, is reportedly negotiating to buy the film rights to the Chilean miner story. Reps for Pitt's company have met with the lawyer of the miners, who are fielding several offers for the movie rights to their drama. Some of the men who were trapped underground for 69 days may even appear in the big screen drama, which already has a good thing going for it: a happy ending.