Brad Pitt made the promotional rounds at Cannes to chat up his new movie The Tree of Life. He's one of the producers on the film and ended up handling a lot of the interviewing because the director, Terrence Malick, is notoriously shy about the press. Brad Pitt and Angelina Jolie sparkled at the film's premiere earlier this week, shortly after Brad rose early for a photo op and chatted up the project at a press conference. He also made time for a few exclusive chats, opening up at one about his decision to have a large family, what he's best at cooking for the kids, and his desire to work with Angelina again after Mr. and Mrs. Smith. Brad Pitt told the AP: 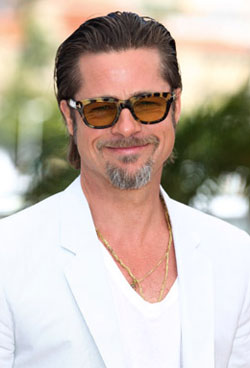 Image Source: WireImage
Brad Says of Working With Angelina, "Why Aren't We Doing Everything Together?"  originally posted on POPSUGAR Celebrity News
Angelina JolieBrad Pitt
Around The Web

Some Good News
Brad Pitt's 8-Second Stint as a Weatherman Begs the Question: Did He Miss His Calling?
by Kelsey Garcia 21/4