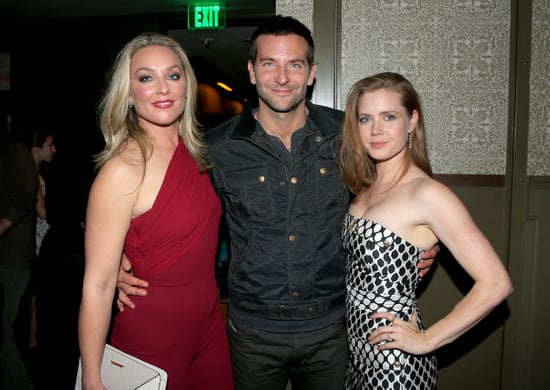 Bradley Cooper was sans perm for a screening of his '70s-era drama American Hustle in LA on Saturday. The actor was joined by the film's director, David O. Russell, as well as costars Amy Adams and Elisabeth Rohm — but it was Bradley's mother, Gloria Campano, that may have been his loveliest date of the night. This isn't the first time we've seen Bradley out on the town with his mom, as she accompanied her famous son at the Oscars in February, and Bradley also revealed earlier this year that he and Gloria moved in together after the death of his father in 2011.

Bradley is back on the West Coast after mixing work and play in Hawaii. He recently filmed romantic beach scenes with Rachel McAdams for their still-untitled Cameron Crowe project before hitting the sand for some shirtless fun with John Krasinski and a pregnant, bikini-clad Emily Blunt. We'll likely see more of Bradley on the red carpet when he reunites with Amy, Christian Bale, and Jennifer Lawrence to promote American Hustle before its Dec. 18. release.