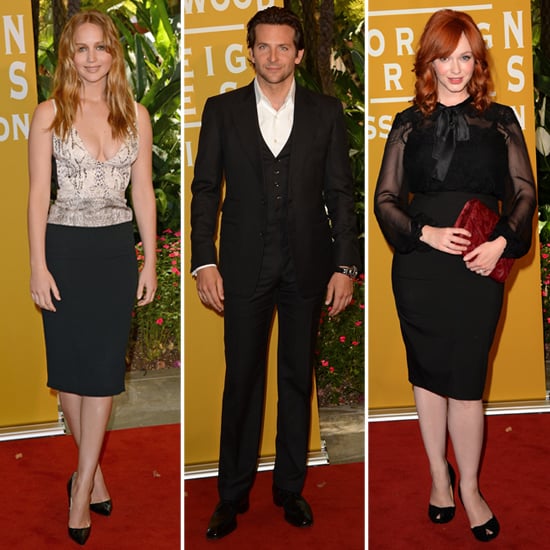 Major stars of TV and film gathered together in LA today for the Hollywood Foreign Press Association's 2012 Installation Luncheon at the Beverly Hills Hotel. Jennifer Lawrence stepped out in a Narciso Rodriguez ensemble and met up with her Silver Linings Playbook costar Bradley Cooper inside the event. Bradley and Jennifer will likely be spending time together this Fall while promoting their movie prior to its November release, but first, she'll report to Atlanta to start filming Catching Fire. Bradley's reportedly heading to Las Vegas to begin work on The Hangover Part III.

Mad Men's Christina Hendricks looked lovely in a black dress while posing for photos on the red carpet, as did Political Animals star Carla Gugino and Django Unchained's Kerry Washington. Inside the ballroom, old friends Dustin Hoffman and Jack Black shared a laugh while John Travolta posed for photos with peers. This year's gathering gave celebrities the chance to catch up and also served as an opportunity for the HFPA to announce its newly inducted officers.