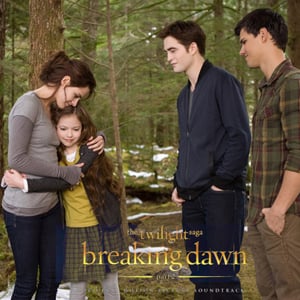 Breaking Dawn Part 2 will wrap up the Twilight franchise this Fall, and while we're curious to see how Bella fares as a vampire, there are other reasons to look forward to the movie's release. Specifically: the music! The Twilight movies always seem to procure interesting acts for the soundtrack, and true to form, the new track list for Breaking Dawn Part 2 is as eclectic as those of its predecessors. There are a few of my favorite artists, like Passion Pit and Feist, plus some other up-and-comers like St. Vincent and Ellie Goulding. There are also a couple of tracks that are piquing my curiosity, like another version of Christina Perri's "A Thousand Years" from Part 1's soundtrack and an appearance by Twilight star Nikki Reed and her husband, Paul McDonald. See the full tracklist after the jump.