Before taking the stage for their big Breaking Dawn panel at Comic-Con, the movie's biggest stars — Robert Pattinson, Kristen Stewart, and Taylor Lautner — did a press conference with reporters about the film. As usual, the close-knit trio brought plenty of laughs as Rob revealed ideas for a new Twilight film, Kristen lamented having trouble working with kids on set, and Taylor talked about his big imprinting scene. Here are the fun highlights: 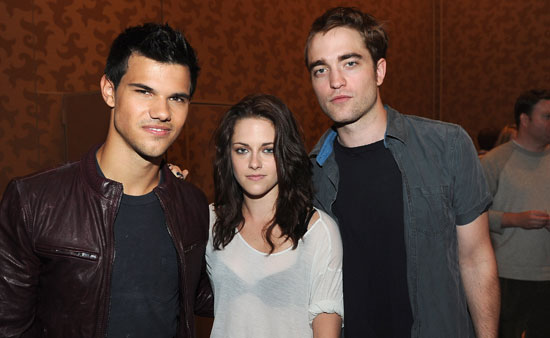 On the most secretive scenes to film:
KS: "The wedding, definitely. It was Secret-Service-style insane. The crew was completely inconvenienced. No phones, no emails . . . but I was like 'If this dress gets on the Internet, I'll die.' I had a Volturi cloak on, that was all we had to cover up, it was really funny."

On whether Breaking Dawn is the end of the Twilight Saga:
RP: [Laughing] "Breakfast time! Twilight, Eclipse, Breakfast Time . . . I guess you'd have to talk to Stephenie really."
Bill Condon: "It's the end of the Bella/Edward story I think. But there are so many different characters, I'm sure she'd want to revisit them sometime."

On their favorite scenes to film:
TL: "I've always been able to choose one, but this one I can't with this movie. There's so much going on in this movie and all of the characters are dealing with their own little things. It's impossible for me to choose. Jacob changes so much from the beginning to the end, so it's hard for me to choose."
KS: "There's a scene with me and Charlie at the wedding that I love so much. And also with Renee. I really love them."
RP: "The birth scene is so different from everything else in the movie. For a fantasy series it goes quite far. It's hardcore, it's graphic. There's no other way to do it. It was fun."

To see what scenes made them nervous and what it was like working with kids on set, just read more.

On fans getting access to footage:
KS: "We didn't know when we were being photographed and stuff, that was always a weird experience after the fact."
TL: "A lot of the movie takes place inside, so most of the time spent in Baton Rouge on a stage. Breaking Dawn is very intimate, and they did a really good job allowing us to be creative. We really didn't have to focus on being distracted on this movie."
KS: "They protected us!"

On filming in Brazil:
TL: "I wasn't there, but they told me there was an extra that looked just like me . . . and then they showed me a picture and even I thought it was me!"

On relating to Bella's emotional roller coaster:
KS: "Really, with everything I do, it's hard to take myself out of it. I'd been building up to these moments for four years. This one has really cathartic, impactful, huge life moments and they are very rooted in a reality that I can completely see myself in. Anyone who reads the book can imagine it. I do feel like it's very close to the book, but we also sort of added in some bits. There are some surprises that surprised me too."
BC: "There's no bigger Twilight fan than Kristen."

On nerdy things they've learned about each other:
KS: "Breakfast time!"
KS: "Taylor can dance! He can move his hips better than I will ever dream. Literally. He can move."
RP: "That's not nerdy, that's awesome!"
TL: "You're right, I can do that one. In the hair and makeup trailer, breaking it down."

On what scenes they were nervous about filming:
TL: "I was pretty nervous about imprinting. I was given an X [where Renesemee would be] on a wall, and I had to walk into a room on the verge of killing this baby, and then stop twist and imprint on it, whatever that means. Stop, twist. and imprint. It was challenging. I spent a lot of time talking to Bill and to Stephenie [Meyer]. What exactly does imprinting even look like? It was tough so I sure hope it comes across alright."
RP: "Embarrassingly, the thing I was most nervous about was to take my shirt off. So much of the books are about Edward's body . . . I think in the book it's mentioned every three pages."

On the most awkward scene to film:
KS: "I couldn't pick up the kid sometimes. We had Mackenzie Foy, who is an amazing little kid. Like the coolest kid ever. Smarter than me in a lot of ways. Then we had these other girls to play the younger version of Mackenzie. They're all great, awesome kids, but I'm awkward, I can't handle that. I look ridiculous picking them up, they were bigger than me in some cases!"
RP: "We had an animatronic baby for one bit . . ."
KS: ". . . And to read the books, and it's such a great scene, and then to know . . . "
RP: ". . . And to see that it's Chucky from Child's Play."
KS: "And it had hair! And it's a newborn baby."
RP: "I bet you've never seen a baby with a wig on it!"