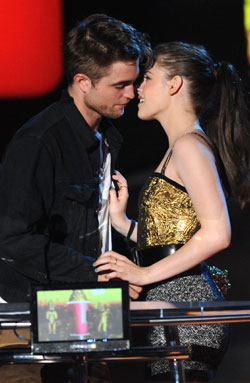 The cast of Breaking Dawn recently convened in Baton Rogue to reprise their roles in the Twilight series. The fourth book deals with some seriously sexy scenes between Robert Pattinson and Kristen Stewart's characters, and the latest news coming from the set is that those intimate moments will be even racier in the film. A source says that "there is a little more sex in the movie, and more sexual dialogue. The script is actually good. Really good." So, tell us, with things heating up between Rob and Kristen in real life — should Edward and Bella totally go there or take it down a notch?