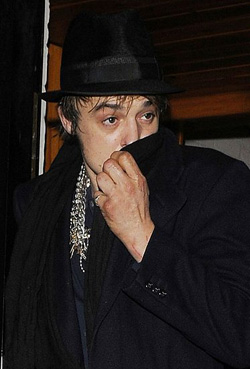 Pete Doherty has been sentenced to 14 weeks in jail for violating his probation and using drugs.

He had been given a suspended sentence last October for possession of drugs and driving illegally, and he was meant to take part in a rehab programme and regularly visit court for progress reports.

A spokesperson for West London Magistrates Court — where Judge Davinder Lachar gave the sentence today — said the reason for the sentence was "breach of time keeping, non-compliance of his order and using different drugs".

Pete's spokesperson has told NME.com that the singer is looking into grounds for appeal.

The singer's 26th April solo show at the Royal Albert Hall will be postponed, but Pete's label Parlophone said:

"[The show] is due to be rescheduled and all tickets will be valid for the new date once it has been announced. Peter was very much looking forward to the show and would like to offer his sincerest apologies to all his fans and all those concerned".

The 14-week sentence will also mean that Pete will not be able to play Glastonbury, which is taking place from 27-29 June.