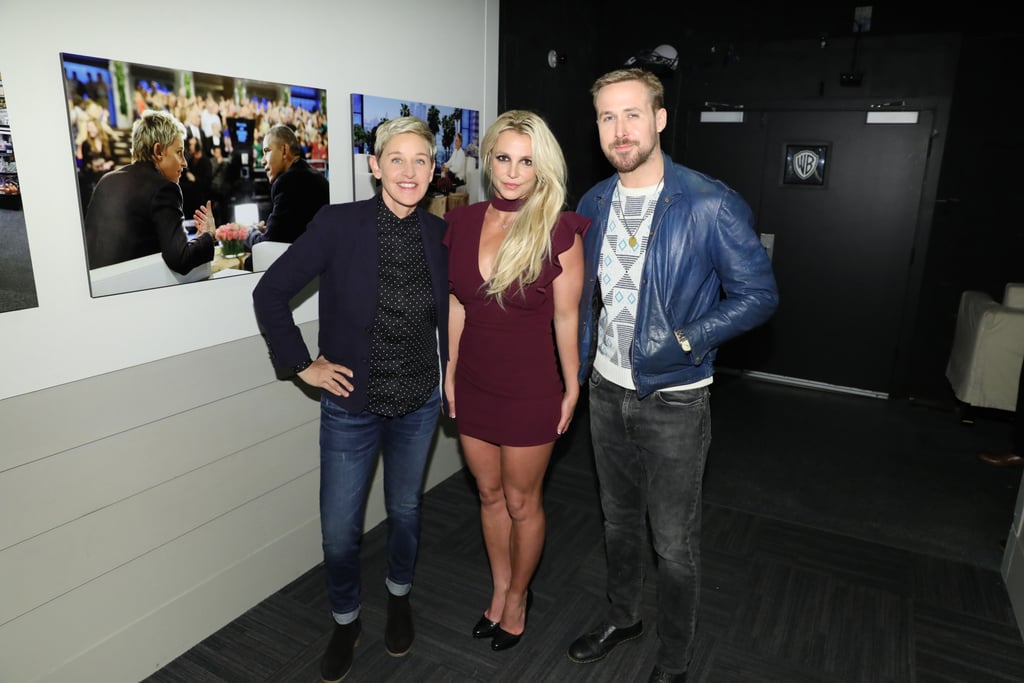 Brace yourself, '90s enthusiasts, because Ellen DeGeneres blessed us with a magical Mickey Mouse Club reunion. Both Britney Spears and Ryan Gosling appeared on Ellen's show on Friday, and the pair linked up for a photo backstage. When Ellen asked Ryan how long it's been since the stars have seen each other, he said, "Neither one of us could remember, which I think is a sign that it's been quite a while."

Several years later, though, he still remembers his first impression of the pop star. "I remember when we first got to the show, they sort of had all the kids perform for one another," he explained. "I remember it was Christina Aguilera, and then Britney performed. And I remember thinking, 'Oh, OK, so they're like freakishly talented.' You know? I was used to working with talented people, but that was another level." Ellen asked what kind of talent he put on display, and he joked, "I think I was just like, 'I'm Canadian.'"

Earlier this year, Britney said she'd be up for a Mickey Mouse Club reunion, telling ET, "It was probably one of the most special times in my life." Meanwhile — stay with me, here — Justin Timberlake once appeared on Ellen's show and reminisced about his MMC days with Ryan, who lived with him during that time, and they've already had a handful of reunions over the past couple years. Justin and Ryan were spotted hanging out in NYC back in 2015, and they were pictured together at last year's Oscars. The moral of the story? Maybe this was a baby step, and next time Ellen will call her BFF Justin Timberlake plus Christina Aguilera and the rest of the MMC stars for a truly epic reunion. Hey, we can all dream, right?

Related:
This Throwback Picture of Justin Timberlake and Ryan Gosling Is Everything
Previous Next Start Slideshow
The Ellen DeGeneres ShowRyan GoslingEllen DeGeneresBritney Spears
Around The Web

Entertainment News
Britney Spears Just Shared a Rare Picture of Her Family, and Her Caption Is the Sweetest
by Navi Ahluwalia 5 days ago