Chris Evans is about to "neutralize a lot of threats" as Captain America/Steve Rogers in the upcoming sequel, Captain America: The Winter Soldier. The trailer is here, and it's got a whole lot of a bulked-up Evans, Scarlett Johansson as the Black Widow, and even more Samuel L. Jackson than ever. Following the catastrophe in New York, Steve is a little wary of S.H.I.E.L.D., especially the fact that the elite team specializes in some morally questionable methods: "This isn't freedom, this is fear." It's not all lectures, though; there's tons of action! The Captain sails out of a plane with no parachute (he's cool like that), he kicks butt in an elevator, and, if you watch until the end, Bucky Barnes (Sebastian Stan) returns! This time, he's the Winter Soldier. 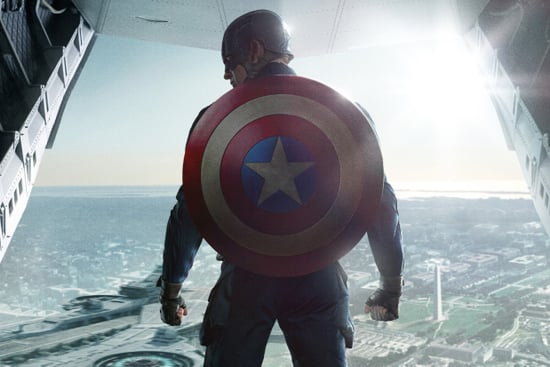 With all the action and just the right amount of humor ("All the guys in my barbershop quartet are dead, so . . . "), this trailer actually makes me far more excited about this installment than the first Captain America movie. Here's what I want more of: Emily VanCamp, Anthony Mackie, and Stan as the "cybernetically enhanced" Winter Soldier. Captain America: The Winter Soldier is due out on April 4; watch the trailer after the jump.

Image Source: Disney
Captain America Is Back and Bulkier Than Ever  originally posted on POPSUGAR Entertainment News
Captain America The Winter SoldierMoviesMovie Trailers
Around The Web

Celebrity Style
J Lo Posted a Picture in a Gorgeous Wedding Dress, but It's Not What You Think
by Nikita Charuza 18 hours ago