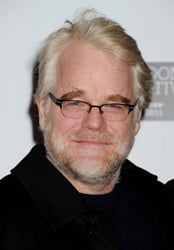 On the heels of last week's news that Jena Malone has been cast as Johanna Malone in Catching Fire, Oscar-winning actor Philip Seymour Hoffman has reportedly accepted a role as well. He'll play Plutarch Heavensbee, the new Gamemaker at the Capitol, in the second chapter of the Hunger Games trilogy.

Hoffman has most recently been on Broadway, playing the lead role in Death of a Salesman, so this will be quite the change from his recent work schedule. Having recently read the second book myself, Hoffman seems like an ideal fit for Seneca Crane's successor. What do you think, is he the type you were imagining while reading the series?