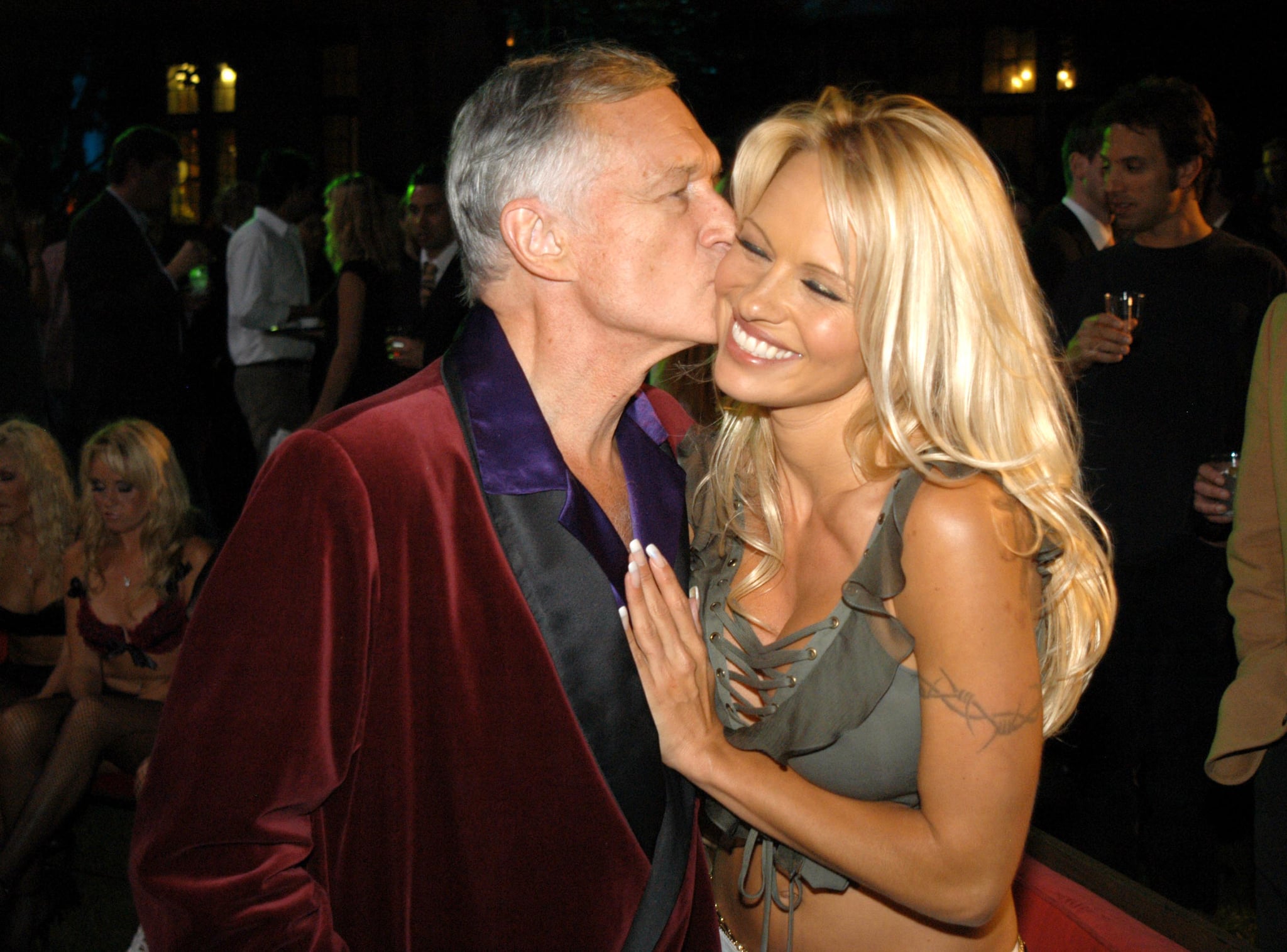 Hugh Hefner passed away at the age of 91 on Wednesday. Playboy, the magazine Hugh founded, confirmed his death in a statement to E! News, saying he "peacefully passed away today from natural causes at his home, The Playboy Mansion, surrounded by loved ones." Hugh — who is survived by his wife, Crystal Harris, and four adult children from previous relationships, daughter Christie and sons Cooper, Marston, and David — made a huge impact on pop culture throughout his life. Celebrities, including a few of Hugh's former girlfriends, have taken to social media to pay tribute to him in the wake of his death. His son, Cooper, also released a heartfelt statement about how greatly his dad will be missed. See all of the touching tributes below. 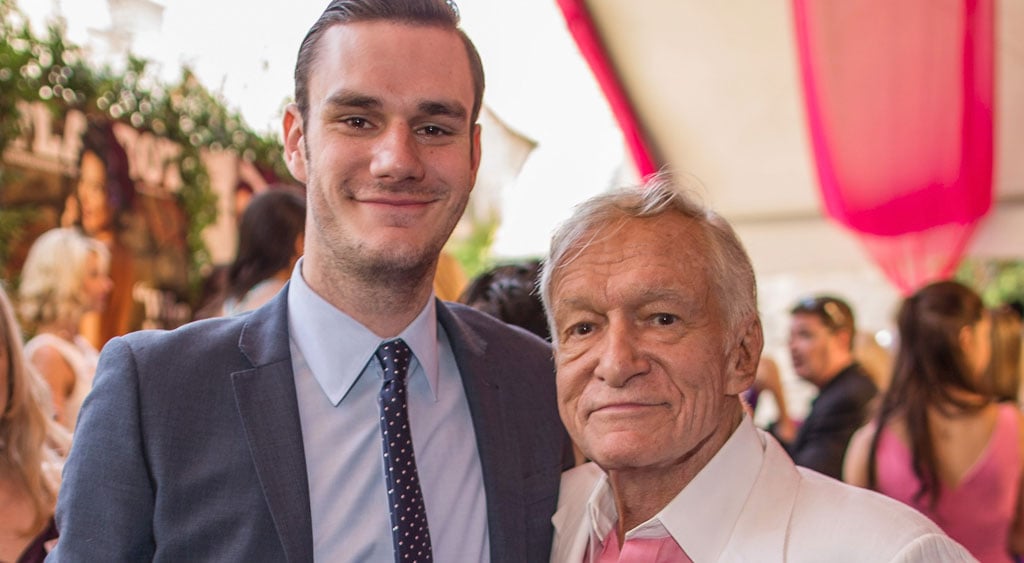 Image Source: Getty / Christopher Polk
"My father lived an exceptional and impactful life as a media and cultural pioneer and a leading voice behind some of the most significant social and cultural movements of our time in advocating free speech, civil rights and sexual freedom," Cooper said in a statement. "He defined a lifestyle and ethos that lie at the heart of the Playboy brand, one of the most recognisable and enduring in history. He will be greatly missed by many, including his wife Crystal, my sister Christie and my brothers David and Marston, and all of us at Playboy Enterprises." 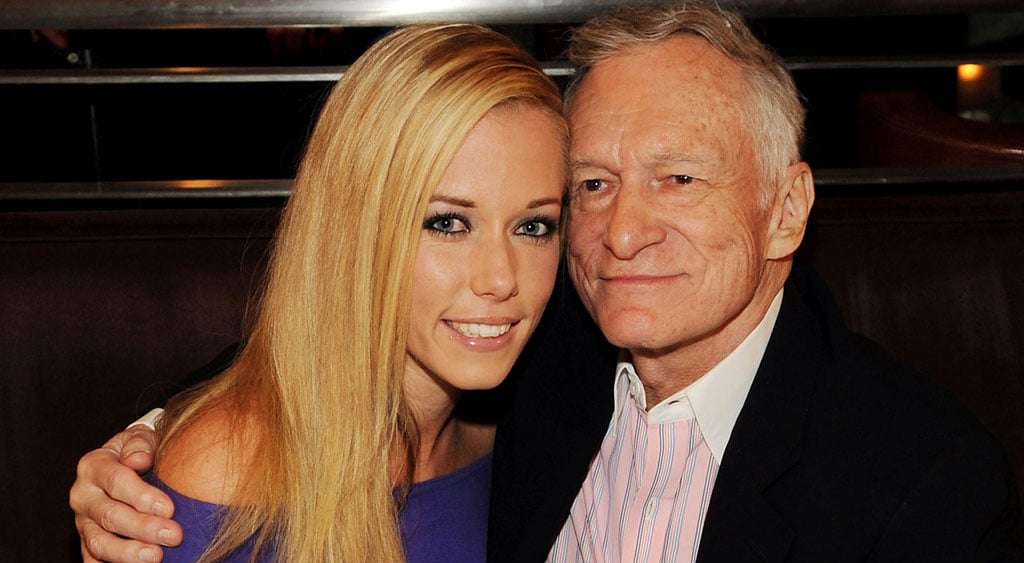 Image Source: Getty / Denise Truscello
"Hef changed my life," Kendra told E! News in a statement. "He made me the person I am today. I couldn't be more thankful for our friendship and our time together. I will miss him so much but he will be in my heart forever."

RIP to the legendary Hugh Hefner! I’m so honored to have been a part of the Playboy team! You will be greatly missed! Love you Hef! Xoxo 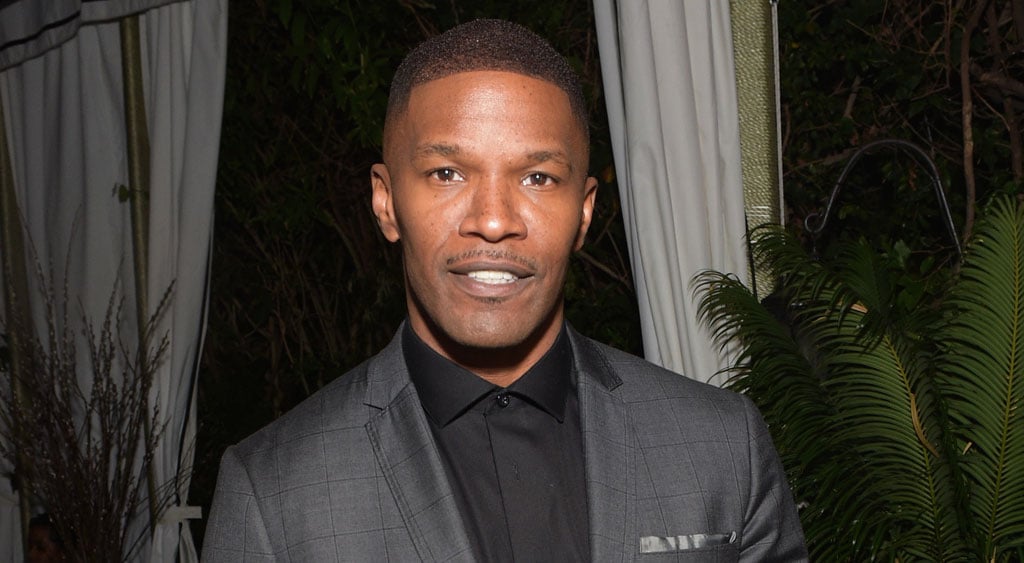 Image Source: Getty / Stefanie Keenan
"If there's anyone who lived life to the absolute fullest it was you," the actor wrote on Instagram. "I will never forget the first party I went to at your house.... you welcomed me allowed me to talk to you… And then you gave me the microphone and you let me turn up! I told you how I snuck into the Playboy Jazz Fest… And you said you don't have to sneak in anymore… And for the past 20 years I've sat next to you at the most incredible jazz fest in the world... your spirit and your energy will live forever… And I know the VIP in heaven is off the chain right now... Nothing but love and gratitude."

Goodbye #Hef Mr Hefner I have so many thoughts, I have no brain n right now to edit I am me because of you You taught me everything important about freedom and respect. Outside of my family You were the most important person in my life. You gave me my life... People tell me all the time That I was your favorite... I'm in such deep shock. But you were old, your back hurt you so much. Last time I saw you You were using a walker. You didn't want me to see. You couldn't hear. You had a piece of paper in your pocket you showed me - with my name Pamela with a heart around it. Now, I'm falling apart. This feeling is so crazy. It's raining in Paris now. I'm by the window. Everything anyone loves about me is because you understood me. Accepted me and encouraged me to be myself. Love like no one else. Live recklessly With unfiltered abandon. You said the magazine was about a girl like me. That I embody the spirit you fantasized about. I was the one. You said. I can hear you say - Be brave. There are no rules. Live your life I'm proud of you. There are no mistakes. And with men - Enjoy ... (Your wonderful laugh) You have the world by the tail You are a good girl And you are so loved - You are not crazy. You are wild and free Stay strong, Stay vulnerable. ... "It's movie time" You loved my boys ... You were always, always there for us. With your love Your crazy wisdom. I will miss your everything. Thank you for making the world a better place. A freeer and sexier place. You were a gentleman charming, elegant, chivalrous And so much fun. Goodbye Hef ... Your Pamela 💋 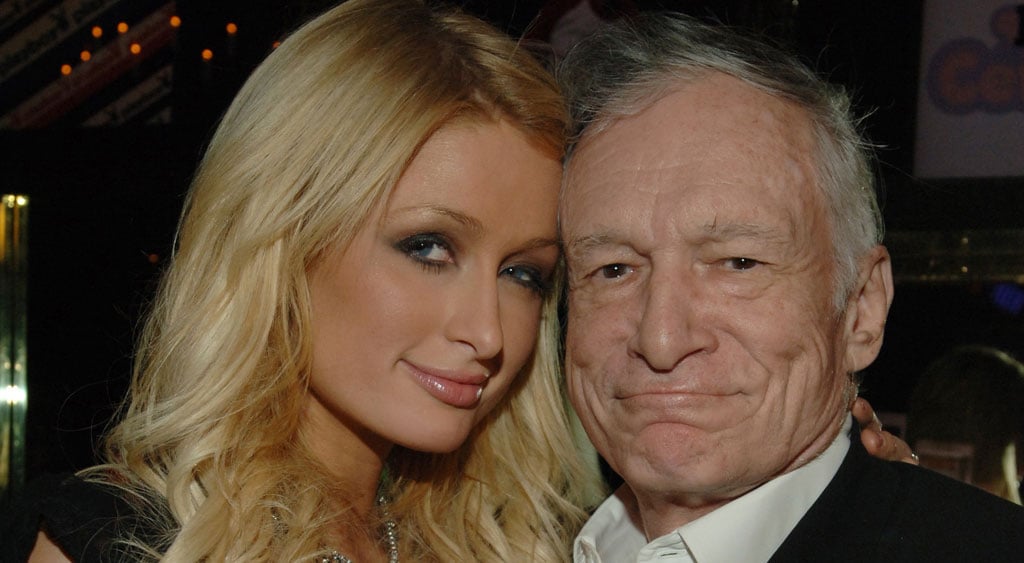 Image Source: Getty / Denise Truscello
"So sad to hear the news about @HughHefner," Paris wrote on Instagram. "He was a #Legend, innovator, genius, one of a kind with a heart of gold. We had so many fun & incredible memories together. I will miss him dearly. Rest In Peace my friend. 🙏🏼"

RIP #Hef Thank you for being a revolutionary and changing so many people's lives, especially mine. Thank you for choosing me to be one of your bunnies. I hope I made you proud. I will forever be grateful. 🙏🏻😓❤️ 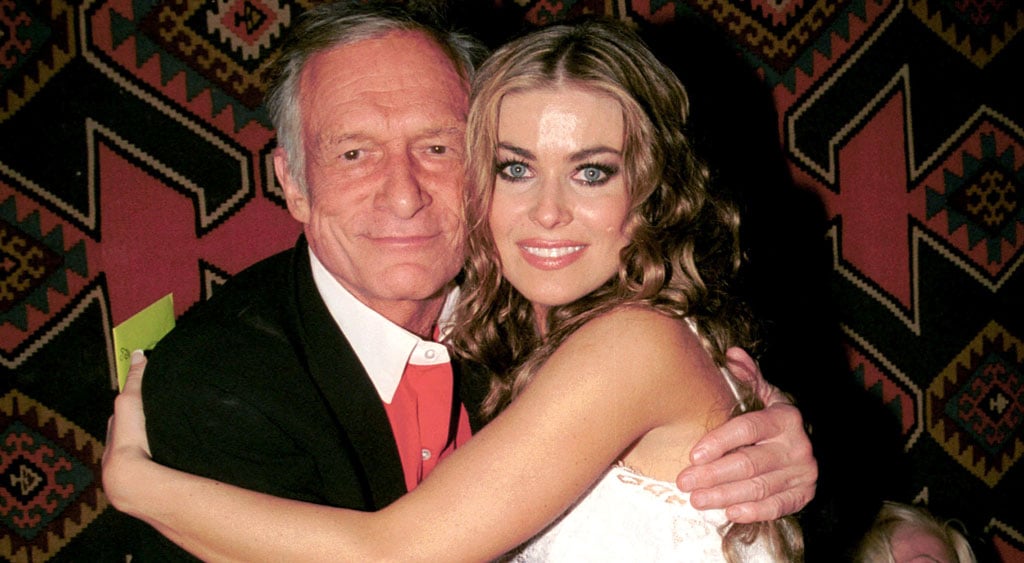 Image Source: Getty / David Klein
"R.I.P. Hugh Hefner 😥," Carmen wrote on Instagram. "The American Icon who in 1953 introduced the world 2 Playboy mag and built the company into one of the most recognizable American Global brands in history , I am so grateful I had the opportunity to shoot many Playboy celebrity pictorials with u Hef❤️ thank u for picking me and Bringing me into the magical world of Playboy ! I just can't stop crying and I can't imagine how many bunnies are crying for u too. U are a class act and I will always have gratitude for your kindness 🙏🏼love u Hef #hughhefner #playboy #icon @playboy"

"It's good to be selfish. But not so self-centered that you never listen to other people" - Hugh Hefner Deeply saddened by this news. My prayers and thoughts are with the Hefner family❤️ #riphef I have met so many amazing people and friends throughout my @playboy family. Thank you Hef for all that you have done for so many people in your life. You will be greatly missed. You're an icon and will live forever in our hearts. #playboy #missjuly2015

Hugh Hefner was a strong supporter of the civil rights movement. We shall never forget him. May he Rest In Peace. pic.twitter.com/oL3lKLZRQ5

I'm am honored that I had the privilege to be apart of the Playboy world! It was a magical time in my life.We'll miss you #RIPHughHefner

RIP @hughhefner 💛 thank you for making me part of the Playboy family. Sending lots of love and prayers to @crystalhefner

A great man, entrepreneur and innovator. Your legacy lives on. #Hef pic.twitter.com/36cRzlUPRw 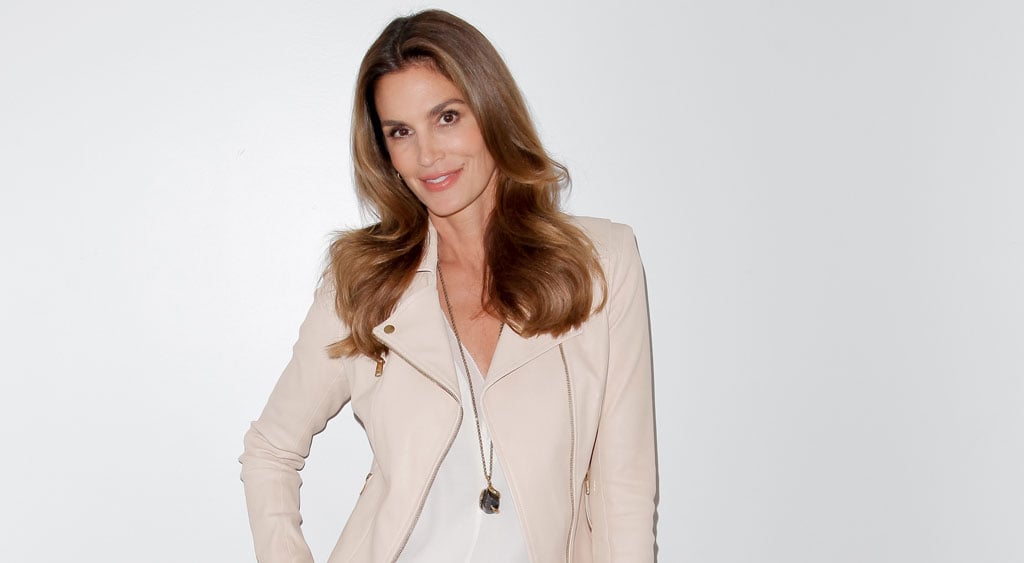 Image Source: Getty / Tibrina Hobson
"Remembering an American icon and a true pop culture trailblazer," Cindy wrote on Instagram. "Honored to be part of the @Playboy legacy alongside my friend @HerbRitts. Rest In Peace #HughHefner ❤️"

Hugh Hefner and I may not have a shared perspective on, you know, stuff BUT he was so lovely on the Playboy Mansion episode of Cesar Millan👯

I had a number of great conversations and with Hugh Hefner. Was such an interesting man. True legend. What an end of an era! 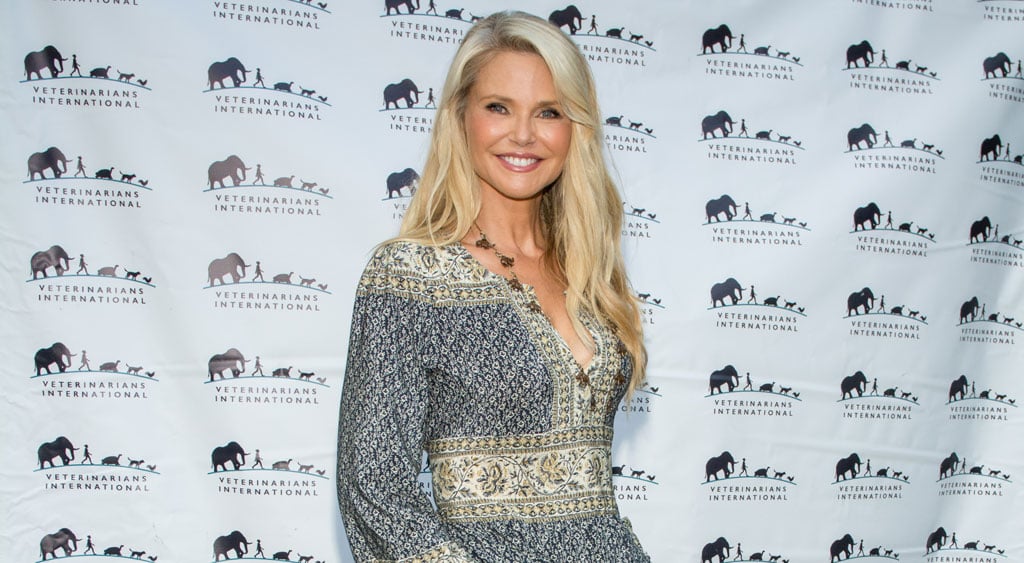 Image Source: Getty / Steven A Henry
Christie paid tribute to Hugh on Instagram by quoting an old Time magazine interview he did, writing, "To begin with, I fought racism, then sexism, now I'm fighting ageism. One defines oneself in one's own terms. If you let society and your peers define who you are, you're the less for it. HUGH HEFNER, Time magazine, Jun. 6, 2011 #riphughhefner #hughhefner #playboy."

One of the nicest men I've ever known. Godspeed, Hugh Hefner. pic.twitter.com/457cchqskO

I met Hugh Hefner at the Playboy mansion. He was very nice to my mom. Don't ask. #RIPHef

Playing bunny Janie on The Playboy Club will always be such a positive memory for me. I made some of my dearest friends. Met Hugh while screening the pilot episode at the Playboy mansion with my dad and he couldn't have been more lovely. RIP🙏🏻

My condolences to the Hefner family. If anyone lived life to the fullest, it was Hugh! My thoughts & prayers are with his friends & family 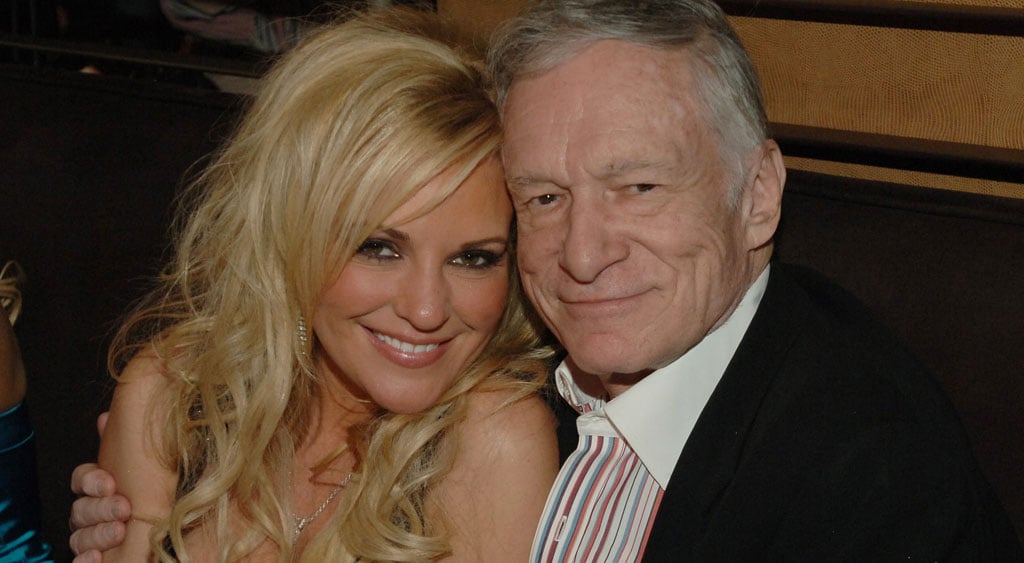 Image Source: Getty / Denise Truscello
"So sad but forever grateful for all the wonderful memories and amazing experiences #RIPHef #Playboy 💔," she wrote on Instagram.

Celebrity Style
She May Be a Fancy Fashion Designer Now, but Victoria Beckham Can Still Conjure Posh Spice
by Kelsey Garcia 18 hours ago