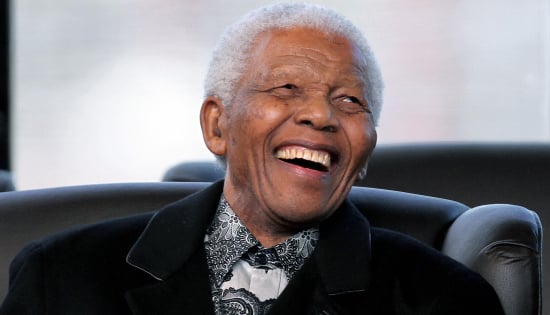 Following Nelson Mandela's passing at age 95, celebrities have taken to Twitter to share thoughtful words and tributes about the great world leader. President Barack Obama called Mandela "a man who took history in his hands," while stars like Kerry Washington, Jennifer Lopez, and Jamie Foxx thanked him for his impact on the world.

Prince William, who had just viewed a screening of the new film Mandela: Long Walk to Freedom with Kate, said after receiving the news, "It's obviously extremely sad and tragic news. We were just reminded of what an extraordinary and inspiring man Nelson Mandela was, and my thoughts and prayers are with him and his family." Read more heartfelt celebrity messages below.

President Obama remembers Nelson Mandela: "A man who took history in his hands and bent the arc of the moral universe towards justice."

"It always seems impossible until it's done." Rest in Peace Nelson Mandela. You will be missed. #trueinspiration #peoplewhochangetheworld

Today we lost the world's greatest advocate for peace and change. Nelson Mandela was a hero to so many. Rest in peace.

#RIP Nelson Mandela. The best example of a human being I can think of. The world is a better place because of you. Thank you

#NelsonMandela you made your people proud!! We'll always love you for it!

Rest in Peace Mr. Nelson Mandela. A fearless leader, incredible human being, inspiration, a REAL hero. Truly one of a kind. God bless you.

It always seems impossible until it is done. --Nelson Mandela

Rest in peace Nelson Mandela. He will always be remembered and will continue to show people to fight… http://t.co/GdtLGtw9i7

RIP Nelson Mandela. You are now truly free. God Bless and enjoy the heavens. Tell Celia Cruz hello for me and azucaaaaarrrr

The world has lost someone truly inspiring. Rest in peace Nelson Mandela

In the modern age, Nelson Mandela will be remembered as an unsurpassed healer of human hearts.

There were only 3 people that I wanted to meet in life, Nelson Mandela was one of them.

When the world gave #NelsonMandela their worst, he showed us all his best. A thousand years from now mankind will still revere him...

There will never be another Nelson Mandela. A true hero that has been deeply ingrained into our history. Thoughts are with his family,

"The greatest glory in living lies not in never falling, but in rising every time we fall." #NelsonMandela

"It always seems impossible until its done"- Nelson Mandela Angel your impossible work, that u made possible is now done. RIP

Every time Melinda and I met Nelson Mandela, we left more inspired than ever. His grace and courage changed the world. This is a sad day.

President Mandela’s life is the closest thing we have to proof of God. http://t.co/ce8FyjCzN1 pic.twitter.com/qg6Of20xL9

“The greatest glory in living lies not in never falling, but in rising every time we fall.” RIP Nelson Mandela

Thanks for your inspiration, friendship & the joy you brought into our lives http://t.co/UxWxoMjbBv #RIPNelsonMandela

RIP Nelson Mandela. The world has lost a great hero.