Jay Moriarty was a famous surfer who was sadly killed in an accident when he was just 22 years old. You'd never get wind of that tragedy in the trailer for Chasing Mavericks, which is based on his life as a teenager and his rise to surfing stardom. Determined to ride a gargantuan wave at Mavericks (off the coast of Northern California), Jay (Jonny Weston) is taken under the tutelage of veteran surfer Frosty Hesson (Gerard Butler). Though Frosty is initially reluctant to take a kid under his wing, he's soon got Jay practicing holding his breath and diving into treacherous waters. 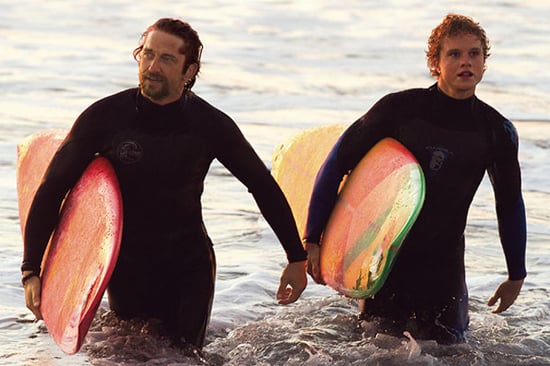 Gerard Butler doesn't typically take on softer films, and I was pleasantly surprised to watch his onscreen relationship with Weston evolve into a father/son bond. Seeing Jay train to overcome bullies, sharks, and the like all feels a bit familiar, but aren't we all suckers for inspirational sports movies? The movie hits theaters on Oct. 26, and you can watch the trailer after the jump.