Bust out your stovepipe hat, because we're about to journey back to the time of Abraham Lincoln. Robert Redford's The Conspirator centers around the trials following the assassination of our 16th president, and in particular, the lone woman charged with taking part in his murder: Mary Surratt. Robin Wright plays the accused, while James McAvoy steps into the role of her lawyer. But perhaps Surratt was actually innocent? The film's trailer suggests that she was covering up for her guilty son in the ultimate act of motherly love. 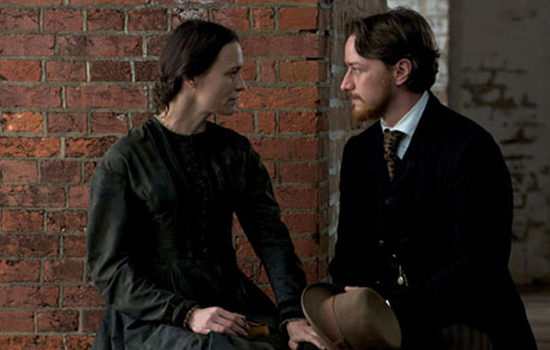 Historical dramas often get a bum rap for being boring, but I'm already intrigued by this one. It looks like part courtroom drama, part thriller, with a stellar cast. Redford has pulled together a supporting ensemble featuring everyone under the sun, including Alexis Bledel, Evan Rachel Wood, Justin Long, Tom Wilkinson, and Kevin Kline. My only concern: Long's mustache. I'm sorry, but it's just ridiculous. Give it and the rest of the film a look after the jump.