Daniel Radcliffe is moving on from his Harry Potter persona with films like this week's Kill Your Darlings, where he plays a young Allen Ginsberg. Along with a few reporters, I chatted with Radcliffe at TIFF about making the film with costar Dane DeHaan (and becoming BFFs), how he has written a film script, and why he likes working on smaller productions after Potter. 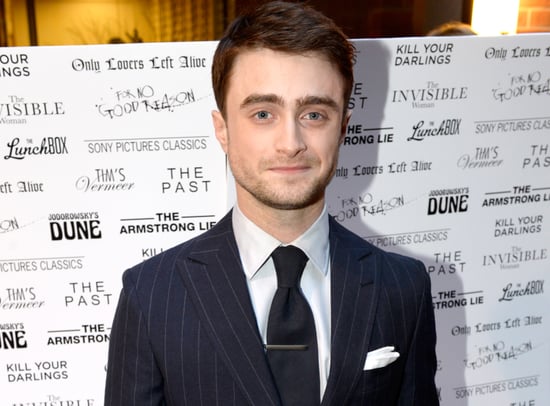 How did you get along with Dane DeHaan?
Daniel Radcliffe: Dane is incredible. Dane's probably the best friend I've made through acting, certainly. He's somebody I see a lot of whenever we can — him and his wife. They're fantastic people. I think building chemistry with people is really just a matter of being curious about them, and being interested, and I think Dane and I got on very well immediately. And we worked on it — you have to work to build chemistry, even if it's as simple as sitting down and just sharing stupid stories from your teenage years about sh*t you did. Just so you build up a relationship.

Are there any unforgettable memories from shooting?
DR: Getting kicked out of Columbia University at 4 in the morning because we're not allowed to film there anymore is not something I will quickly forget. That was very cool. It's the first time in my life that I remember running away from members of our own crew to complete a shot. Our producers were kind of trying to run us off, saying 'no, no, you have to leave, you're costing us money.'

Do you have plans to work in film outside of acting?
DR: I have written a script. I've completed it; I don't know if it's any good, but it's certainly nice to have finished something. That's a huge achievement for me at this point. It's a very, very dark comedy. There's always themes I'm really interested in. They are themes that aren't dissimilar to [Kill Your Darlings], about friendship and when a friendship becomes unhealthy and what you have to do to move on from that. But it's a much more heightened scenario. It's probably sh*t! But the point is, I've finished it, and the next thing I write won't be!

Will you return to theater soon?
DR: It's rather like asking a woman who's just given birth if she's having any more. I just finished a play about a week and a half ago. Yes, absolutely 100 percent — [but] not now.

Do you have a preference for working on movies or in theater?
DR: My preference, if I had to choose one, would be film. I've grown up there; there's a sense of comfort and familiarity on a film set, which I've recently realized is unusual. There's young actors just coming out of drama school, and they have to learn stuff. Because I don't even think about that — there's stuff that's just second nature to me — hitting marks, and finding lights, and the technical side of it.

Coming from an environment of huge film sets of Harry Potter, what's refreshing about making smaller films?
DR: Everything, absolutely. It's a much better way of working, and it's a much more creative way of working to have to go quickly rather than going slow. Twenty-four shooting days — I think that adds something to the film, and I think that adds a kind of vitality you need in a film about youth and about the Beat Generation.

What are some of the differences?
DR: Really the only difference in doing big films as opposed to small films — they're very superficial, the differences — they're things like, how long do you have the crane camera for? On Potter, where I grew up, there were two crane cameras on set all the time, just because you might need one later! And I didn't even realize that was weird or unusual. And we were recceing locations for this shoot, and I heard John (Krokidas, the director) say to our producer, "OK, so this is the day we'll have the crane." And I was like, oh, we get one day with the crane, and we have to do all our crane stuff.

There's stuff like, you don't have a trailer on these films, but honestly I sort of prefer that because it means, if you have trailers, all the actors go back to their trailers and they just don't f*cking talk to each other. Whereas if you're on a film like this, you just have to sit in green rooms, and you have to actually engage with each other and it's much nicer. I hate when actors say stuff like, "there's so much waiting around on film sets, film sets are so boring. You wait in your trailer for so long." You actually don't, you don't have to wait in your trailer at all, you can just be on set, talking to people and having a nice time. I always get annoyed by that. It can only be boring if you allow it to be boring.