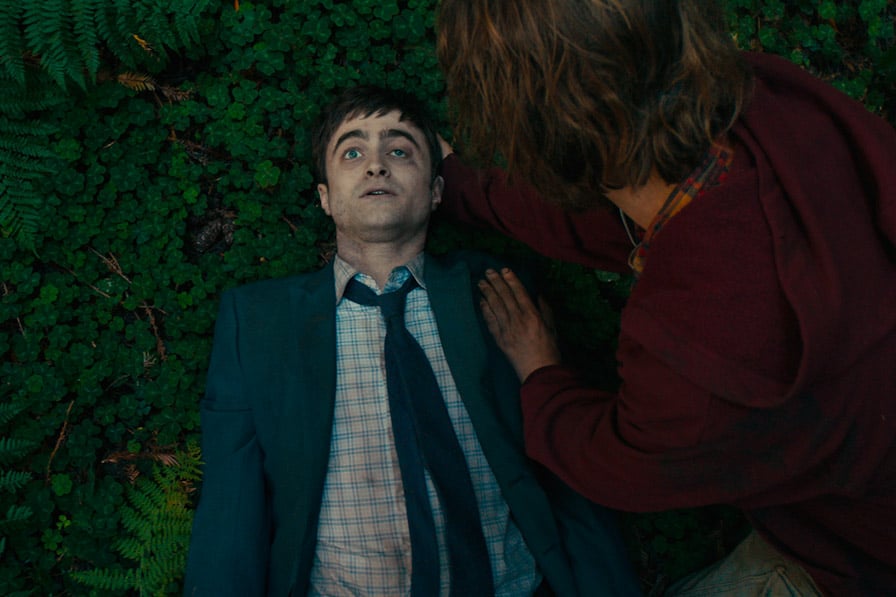 Daniel Radcliffe plays a dead man in his latest film, but that's not the weird part. Swiss Army Man, which was directed by Dan Kwan and Daniel Scheinert, premiered at the Sundance Film Festival this week, and there's one very big reason that critics are talking about it: Radcliffe is a human fart machine throughout the whole movie. Trust me, I don't even like typing those words, but it's true. Lest you think that Swiss Army Man sounds like a wartime drama (I did), the film is actually a dark comedy about a shipwrecked man (Paul Dano) who gets a shot at deliverance when a dead body (Radcliffe) washes ashore.

The illusion that this is at all a serious movie is broken when the dead body lets out a shockingly long fart. "OK," one might think, "That's a thing that happens when you die, right?" Perhaps, but right after that comes another fart and another. So many farts, indeed, that Hank, the castaway, is able to mount the body and ride it, propelled only by its violent farts, to the safety of land — think Free Willy only Willy is the dead, flatulent body of Radcliffe.

It doesn't stop there.

Not only does Radcliffe's character, Manny, fart throughout the entire movie (literally hundreds of farts), his body becomes a water faucet for Hank to drink from and bathe under. His fingers can be made to start fires. Hank uses Manny's teeth to cut his beard. He can shoot pellets at animals with the firm yank of his jaw. And the kicker: his newly discovered erection is used as a magical compass, which guides Hank toward home. Are you beginning to see why the film is titled Swiss Army Man?

None of this, by the way, makes Swiss Army Man a bad movie. In fact, if you can look past the farting, it's incredibly entertaining and original. The question is can you bear to see a grown Harry Potter parting a sea of waves using only his bodily gases, like a punch line to the story of Moses, as told by the Farrelly brothers? Only you can decide that.