Last night's Dirty Sexy Money improved on last week's episode by giving me plenty of Brian being childish. And a little Jeremy being amusing too. So, without further ado, here's my thoughts and a recap. I really want to hear what you thought of this second episode – are you as intrigued by all this as I am? 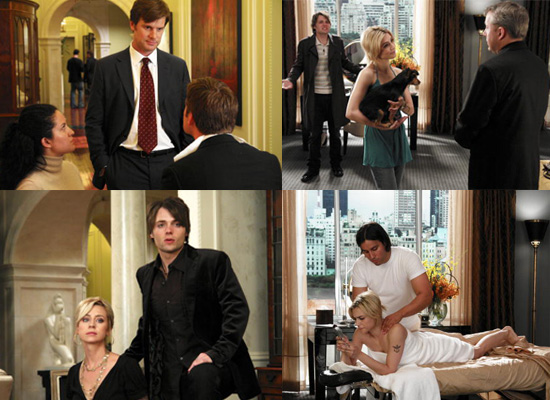 So, to recap slightly, Nick is fairly certain that someone murdered his father, and has been trying to get in contact with the airplane mechanic who hasn't called him back. And his secretary, Daisy, has been trying to work out the password for his dad's briefcase. The episode opened with a comparison between Tripp and Nick's morning routines. I think I'd prefer to be in Nick's position, at least he actually laughs in the morning. Plus I don't think I could handle asparagus for breakfast.

Meanwhile, the Darling family is preparing for a photo shoot for the launch of Patrick's Senate campaign. I'd quite like a beauty salon in my house, I think. Karen wants to include her husband Freddy in the photoshoot, but Letitia says no. Then we cut to Carmelita and Patrick saying that he's not running for Senate after all, he also promises to tell his wife about their affair.

Jeremy visits Juliet, whose independence has forced her all the way to a New York hotel(!) and tries to get her to come home, but she's not interested. I love these two. Independence on Daddy's money. Her only worry is that the Penthouse suite was not available, and asks her twin brother to go and find out who is in there.

For more of my thoughts on this episode, and the rest of the recap, just read more

Brian's gorgeous illegitimate son is still causing issues in Brian's life, but the holy man is being hilariously stubborn and has decided he'll introduce him to his family as an orphan whose parents were killed in a bullet train accident in Sweden. So he's a Swedish orphan. But only until his mother takes him back. As you know, I love Brian – he really makes me laugh, he's so childish. Tripp calls Nick to a meeting to discuss the photo session which will be held at their mansion. And Nick's entrusted to make sure everyone gets there. When Nick gets back into his office he hears that Juliet isn't coming to the shoot, and Brian's son is in his office. Alone. Brian's letting Nick deal with him.

The plane mechanic tells Nick that the $100,000 Brian paid him (that Nick was suspicious about) was blackmail money, as he had heard Dutch (Nick's Dad) talking to Brian about his illegitimate son. Meanwhile, with the twins, Jeremy makes his way up into the penthouse and finds a scantily clad girl (Natalie) that he knows and apparently has had fun with in the past. He gets visibly nervous by her, but his brain is overruled by another part of his anatomy and so he stays to make out with her.

Patrick tells Tripp that he doesn't want to run for Senate after all, he wants to get out of politics altogether, and that photo shoot? It's not happening. Tripp hints pretty clearly he knows about Patrick's extra-curricular activities and lets him know if that comes out he'll help him face those revelations. He uses his 'Dad card' – "make me proud" – and Patrick seems to consent.

Back at the mansion, Karen's getting fitted for her wedding dress and tells Nick to tell her man Freddy that he can't be in the shoot. Meanwhile, Nick's wife is partly amused and partly annoyed by all this Darling activity. And Jeremy lies to Juliet about who's staying in the penthouse, saying there's a chef up there. He seems a little... stunned from his experiences upstairs, and wants to get out of the hotel.

Letitia is not happy with Tripp pushing Patrick into the Senate, and we find out they both know about Carmelita and Patrick. Nick tells Letitia he knows about her affair with his father, and the police's suspicions. She's not sure if Tripp knew about the affair, but she mentions Tripp's diary, saying he would have written about it. Nick gets his hands on it, but the only suspicious entry is an unreadable one from the day Dutch died. Mysterious...

The mother of Brian's illegitmate son, Andrea, leaves the country, but Brian still won't take his son. So Nick has to look after him, and he brings him to the photo shoot. Lions!! There's lions in their house for the photoshoot! Enter annoying-Rebecca, family publicist. Nick tells Freddy he can't be in the shot, and Karen's soon-to-be-hubby decides it's because Nick's still in love with Karen. Then Tripp speaks Swedish to Brian Jnr, who obviously doesn't understand a word of it... it's a madhouse. This madness gets to Nick and he confesses to the entire family (including a fake Juliet) that he took the diary and adds that he suspects Tripp of killing Dutch. Understandably, Tripp is upset, but doesn't give any hints that he knew about the affair.

Nick convinces Brian to see his son, and I really enjoyed Brian trying his best to connect with his Brian Jnr whilst taking him home, but he's still only having him in the house in the guise of being a Swedish orphan. Oh dear. After the shoot Jeremy tries to sneak up to see penthouse Natalie, but Juliet catches him in the hallway and she's really unhappy as she used to be BFFs with her until they had a huge argument. About their hair I think. I am loving Jeremy, he's so funny in this episode... and then he ends up sleeping with Natalie. (BTW Karen will always love Nick, as she confesses in a drunken phonecall, having convinced herself that what Freddy said earlier was true. Delusional...)

Carmelita tells Patrick to run for Senate if that's what he wants to do, and he agrees. Nick returns the journal to Tripp, who gives him a guess for the briefcase code - Letitia's birthday. It works, and Tripp looks devastated (a great and affecting bit of acting from Donald Sutherland), admitting he did know about his wife's affair. In the briefcase, there's a lot of top secret info about billionaire Simon Elder.

Tripp says that Nick should start with Simon in his investigations... And so we look forward to next week – who's Simon Elder and how is he mixed up in all this? And what's going to happen with Brian's son? And Jeremy and Natalie? Let me know what you thought of this ep in the comments below – I can already feel that I'm going to get addicted to this show. Love it.