So, in last night's first episode of Dirty Sexy Money we were introduced to the mad, excessive world of the Darlings and their new (gorgeous) family lawyer Nick George. Poor Nick – his childhood was ruled by the wealthy family and now his adult life is going to be too. At least until he finds out what actually happened to his father. 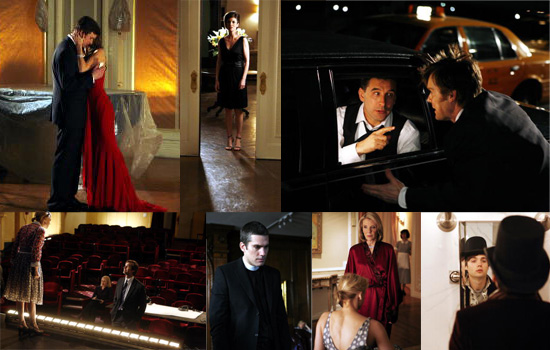 What did you think of the family? I have to say I love Donald Sutherland as Tripp. I think he's the perfect patriarch for the brood, so dashing and with those amazing twinkly eyes. And Natalie Zea as Karen got some priceless moments, including when she tempted Nick into a bad-looking situation in front of his gorgeous wife played by Zoe McLellan. I can see hostility growing and growing between those two women. Karen had the pick of the one-liners, from saying "Nick deflowered me" in Nick's office to open a meeting between Nick and her future husband Freddy, to denying she was drunk by saying she'd only had one scotch. Love her.

For more of my thoughts on the ep, just read more

Jeremy and Juliet are a great couple of characters too, with all the maturity of a newborn baby between them. I guess that's what money can do. Nick's first family problem was Jeremy winning that boat, and the fact it came with a crew of illegal immigrants. Oh dear. I also grinned when Jeremy's "Born To Be Wild" ringtone played on Nick's phone – Nick's secretary Daisy has a fab sense of humour. Although it was bad timing when Karen's ringtone "Pretty Woman" played, that's for sure. And Juliet – although it's nice to see Samaire Armstrong back on our screens, I definitely prefer her with some street smarts. Juliet is so spoiled! But it's good to see her attempting to rebel against her family by moving out to try and make it on her own. With Daddy's money of course...

The Rev. Brian Darling is another of my favourite family members. He is hilarious, especially as the series goes on. Another incredibly immature adult, Brian immediately reverts to a seven-year-old around Nick, for instance – that incredibly girlie fight they had at Letitia and Tripp's engagement party. And the fact he's trying to get his son into that brilliant school without admitting he's his son... I don't know where to begin. He's ridiculous. And a Reverend?!?! That storyline will go to some very amusing places, let me tell you. I would definitely keep watching the show.

What did you think about politician Patrick and his affair with the gorgeous transsexual Carmelita. How stunning is she? Apparently Candis Cayne is the first transsexual to play a transsexual character on a primetime show. I love her and her character's relationship with Patrick, which also gets them into some very amusing situations later in the series. Patrick tempted Nick back in to the family dramas after he'd quit at the party – Nick's just way too good a guy to leave them all to their own devices. I suppose his life has been intertwined with theirs since he can remember, for better or worse, so I'm sure it would be odd without them.

And the first possible piece in Nick's puzzle was set into place. His father was having an affair with Letitia for forty years. Did Tripp know? Is that the reason he died in the crash? Will it have some other ramifications? Well, a) Possibly. b) Probably not as it's so early in the series. And c) of course! This is just the beginning, and remember it's the pilot episode – time to introduce everyone and lay the bare bones of the series. The real fun begins in episode two, and I'd highly recommend you stick around and watch next week's episode too. I certainly will be!