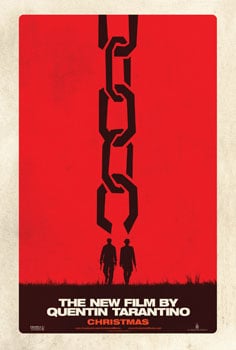 Quentin Tarantino's latest project, Django Unchained, doesn't open until Christmas, but we're getting a look at the poster for the period piece today. Django features Jamie Foxx as a slave seeking revenge against his former master, an evil plantation owner played by Leonardo DiCaprio. We haven't seen any footage of the flick, which Tarantino calls a Spaghetti Western. The red and black deco teaser is cool, but we're curious about who the two silhouetted men are supposed to be — possibly Foxx and Christoph Waltz, who plays a bounty hunter? What do you think?

Get a better look at the one-sheet when you read more.