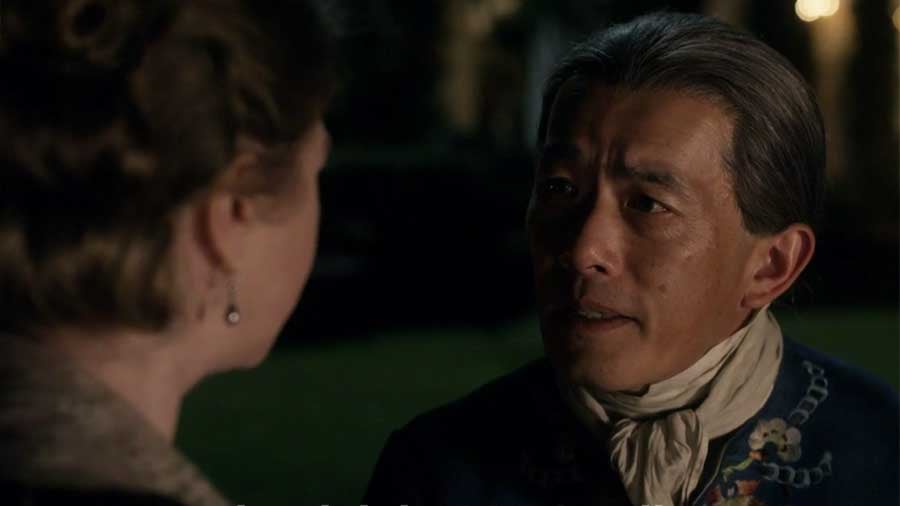 One of the best changes the Outlander writers have made from the book is the character of Mr. Willoughby. His portrayal in Voyager is problematic, with a lot of the good aspects of the character being overshadowed by stereotypes and a lack of character development. He is definitely an instance of a supporting character (one of colour, in this case) who seems to be there solely to advance the main character's story rather than getting much story of his own.

But Outlander may be changing that. The show has already made him less of a caricature and more of a person, but in the latest episode, the show is perhaps setting up a future for him that the book did not.

At the governor's ball, Mr. Willoughby overhears Margaret Campbell telling a man servant that he is going to "reach distant shores without harm" and one day "be free of the shackles" that bind him. Her brother stalks up and chastises her for telling fortunes without getting any money for them, as Mr. Willoughby gently smiles at her from across the room.

Later, he approaches her as she sits outside and tells her that her brother does not treat her as she deserves. Margaret calls him "a rare soul" and he responds that she is "rarer still." He then calls her "Yi Tien Palova," which he says means "flower from heaven." If you'll recall, his real name is Yi Tien Cho, which he says means "leans against heaven."

Methinks a romance is blossoming, and it would be the perfect ending for these two characters, who are not seen again after the events of Voyager.

In the book, Margaret also has quite a different background than she does on the show. Book Margaret is gang-raped following Culloden and it leaves her in a mentally diminished state, prone to manic fits and bouts of catatonia. Her brother, Reverend Campbell, exploits this by running a fortune telling grift (though her visions may have sometimes been real). When her brother ends up being killed after Mr. Willoughby identifies him as the Edinburgh killer, Margaret is taken in a by a group of escaped slaves who use her gifts in a voodoo ceremony. Claire and Jamie consider "saving" her, but decide she's better off with them and let her leave.

Related:
Here's What You Need to Remember About Abandawe on Outlander

Mr. Willoughby, meanwhile, kills Reverend Campbell and then escapes into the night. We never really know what happens to him, only that Jamie tells Claire maybe he'll end up with a group of Chinese traders in Martinique. Neither character is given a very thorough or satisfactory send-off.

On the show, however, Margaret seems like a perfectly normal woman, except for the fact that she's trapped under her brother's control. There's no rape backstory and the voodoo ceremony may not even be included (that remains to be seen). So perhaps the show has decided to give Margaret and Yi Tien Cho a happily ever after together. They don't necessarily have to stay with Claire and Jamie, but they could settle down together and live out the rest of their days in Jamaica. I really hope that's the way this is going to end.

Shrill
From "Fat Monica" to Fat Amy: How Hollywood Highlighted My Internalized Fatphobia
by Grayson Gilcrease 20 hours ago