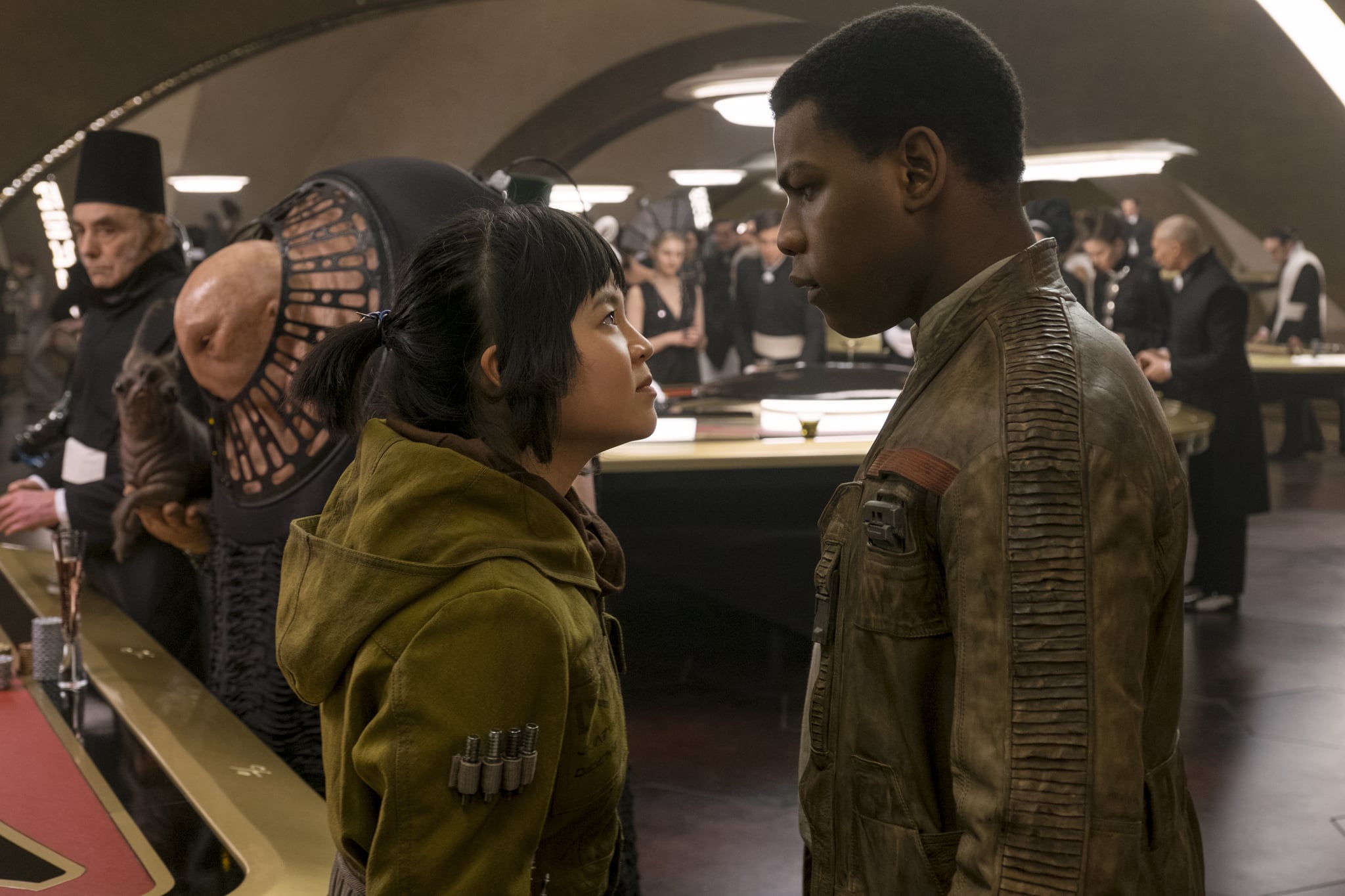 Overall, I loved the latest instalment of the Star Wars franchise, The Last Jedi — but I've got a serious bone to pick with our newest Rebel hero, Rose Tico.

Let me first mention that, in general, I wasn't the world's biggest Finn fan after seeing both The Force Awakens and the first three quarters of The Last Jedi. I'm not not a fan, but for me, there are other characters who satisfy my hero itch (and my eye-candy itch — hello, buff Kylo Ren). Sure, it's honourable that Finn ran away from his life as a Stormtrooper after gaining a conscience, but once he became low-key obsessed with Rey, I kind of just waited for him to do something, anything, for the Resistance other than act in her favour or to save her life.

In Episode VIII, his storyline isn't much different — he attempts to run away from the Rebel fleet with Leia's remote tracker that would allow Rey to know where the Rebels were when she was ready to return, because he didn't want her to come back to a ship being tracked and hunted down by the First Order. After Rose, a Resistance ship maintenance worker, catches him in the act, stuns him, and inadvertently helps him solve the mystery of how to shut down the First Order's lightspeed tracker, Poe Dameron sends the pair on a mission to do just that. It's a difficult mission that Finn's happy to attempt if it means saving Rey's life — again (though The Last Jedi made it pretty clear that Rey doesn't actually need saving because she's the one doing the saving, thankyouverymuch).

Finn's actions, though honourable, are completely driven by Rey and not necessarily for the greater good of the Resistance.

Finn's actions, though honourable, are completely driven by Rey and not necessarily for the greater good of the Resistance.

That is, until the Resistance lands on Crait, where they attempt to send out a distress signal to the outer rim while fighting off Kylo Ren, General Hux, and the rest of the First Order, who have a huge-ass laser cannon that threatens to obliterate the Rebel fleet. Although Rey had made her reappearance by now — flying in Han Solo's Millenium Falcon with Chewie and leading the First Order fighters away from the janky ships her friends were piloting — Finn chooses this moment to make his first real, selfless decision for the Rebel cause: destroy the cannon by flying his ship into the mouth of it, thus sacrificing himself.

At this point, I'm sitting on the edge of my cinema seat (figuratively though, because I was actually nestled way into the back of my chair, resisting putting my hands over my eyes), mouth wide open in shock as I watched Finn in his unflinching resolve head toward the cannon after Rose and the rest of the Rebels had already peeled away from the fight on Poe's orders. It's clear that nothing is going to stop him from making this ultimate sacrifice for his friends — until Rose freaking flies back toward him and knocks his rust-bucket out of the sky using her own ship.

Finn was about to, for the first time, do something for the Rebel cause that made me truly respect him and his character — something that yes, would ultimately help Rey, but this time, the Resistance as a whole was put first, not just Rey's life. It's not like I wanted Finn dead, but if he had to die, this was certainly the most noble way to go (and not to mention would be an instance of one of our beloved heroes actually dying in the middle of a huge fight, instead of always narrowly and conveniently dodging death). His bold act would have completely redeemed him from what, in my mind, was a period of selfish actions and decisions solely in favour of Rey's survival.

As I said, I loved The Last Jedi, but if you need me, I'll be here tweeting Rian Johnson to film an alternate to that scene in which Finn dies the ultimate hero.