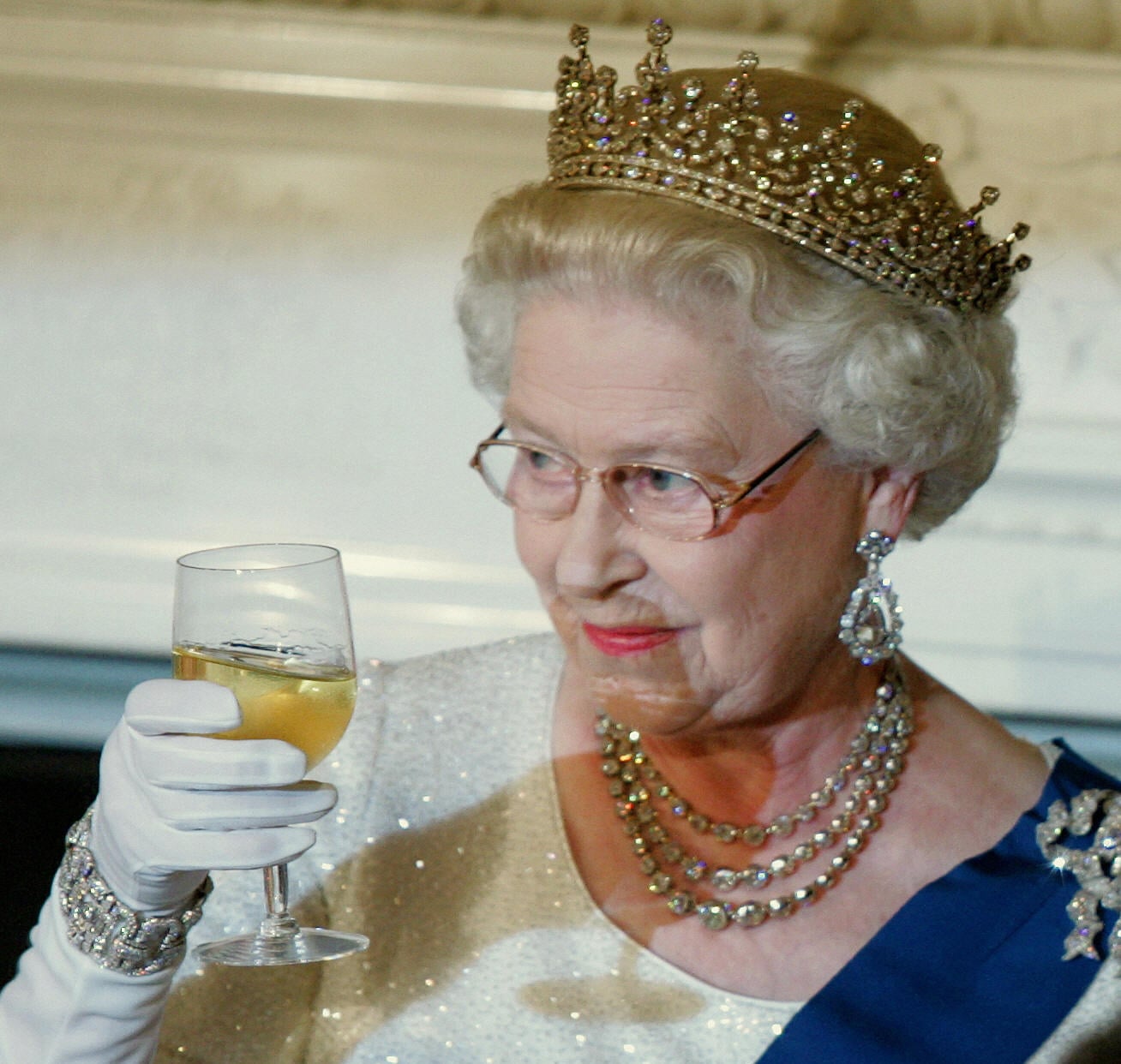 No one throws a party quite like Her Majesty, whether it's a super-glamorous formal banquet, a traditional afternoon tea, or a pull-out-all-the-stops royal wedding. Entertaining is something the 92-year-old has been doing as part of her job description for most of her life. To learn from the best, take note ahead.

Invitations to the queen's annual garden parties are sent out six weeks before the event, while for banquets the seating plan is figured out on an eight foot board and a slip of paper that can be moved around representing each guest.

It's all about the lighting! The ballrooms in Buckingham Palace are softly-lit by overhead chandeliers, wall-mounted lights with shades, and candelabras on the tables — although when it came to Prince Andrew's 21st birthday party, Windsor Castle was lit up with lasers and filed with dry ice! For formal occasions, the queen likes to have fresh flowers on the table, and it's said that she favours yellow freesias.

Menus are always in French, and each place setting is arranged with six pieces of cutlery, plus a butter knife. The space between knife and fork is 18 inches, and napkins are folded into a "Dutch bonnet" shape. Meanwhile, when it comes to royal family Christmases, the queen commissions bespoke poppers for her family to pull.

Her Majesty is all about local, seasonal produce and likes to have fish served as a starter and meat for the main course, followed by pudding and a fruit course. Guests are served five pairing wines throughout the meal, starting with a glass of champagne. Afterwards there's a change of scenery when guests are ushered through to the state rooms for coffee and hand-made petit fours. Her Majesty prefers the menu at her private bashes to be more informal though — at Charles and Diana's evening reception, there were scrambled eggs and baked beans, and at her own 60th birthday party, she chose salmon fishcakes. 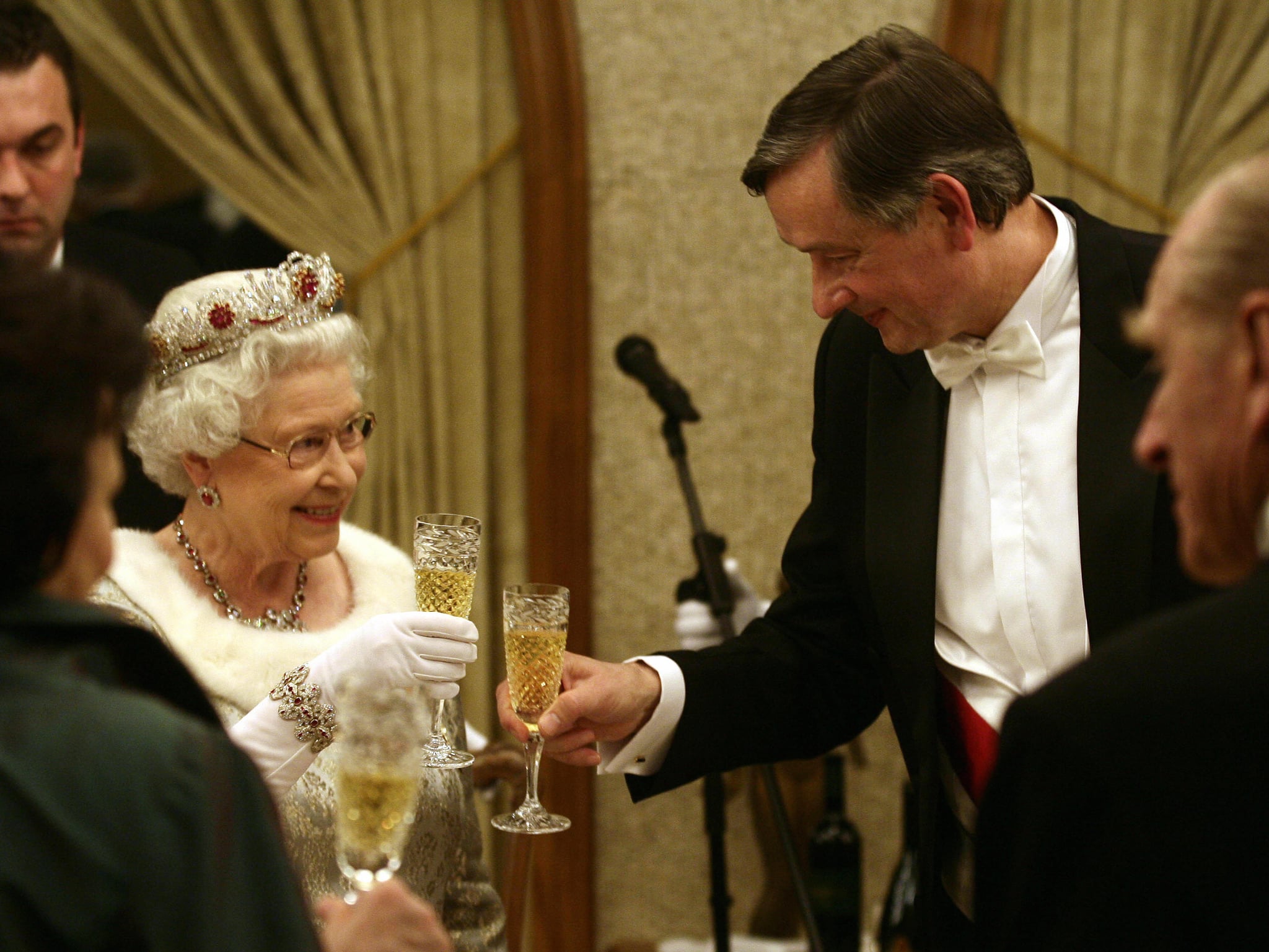 When it comes to entertaining formally, the queen has a raft of specialist wine merchants to choose from, and as to be expected when it comes to the pinnacle of hosting, there always an array of the finest fizz on offer. Royal Warrant holders include no less then eight kinds of champagne: Bollinger, Mumm, Krug, Lanson, Louis Roederer, Moet and Chandon, Veuve Cliquot, and Pol Roger.

Port and red wine are always poured into glass decanters the afternoon before a formal dinner. Sometimes special cocktails are created; at one of the queen's birthday parties the Windsor Fizz — a mix of champagne, elderflower, and raspberry liqueur — was served.

The queen knows that to get a party started it's all in the details. Guests were supplied with sailor hats at Charles and Diana's wedding, and Her Majesty has participated in her fair share of costume parties over the years; she went as a Spanish infanta to a fancy dress bash when she was in her twenties, and also dressed up for Prince William's Out of Africa-themed 21st birthday party.

There are charades at Christmas with the family, and it's also been said that Her Majesty is good at doing impressions. However, everyone knows the best way to get a room loosened up is with a spot of dancing. The queen always takes to the dance floor for a few reels when she throws a highland ball at her Scottish residence Balmoral, and apparently she took to the dance floor with Sir Elton John at Prince Andrew's 21st to "Rock Around the Clock."

The royal's all-time favourite dance though? The conga! The queen's father George VI led a conga line through the palace the night before the queen's wedding, and Her Majesty also joined a conga line at the VE Day celebrations and Charles and Diana's wedding reception.