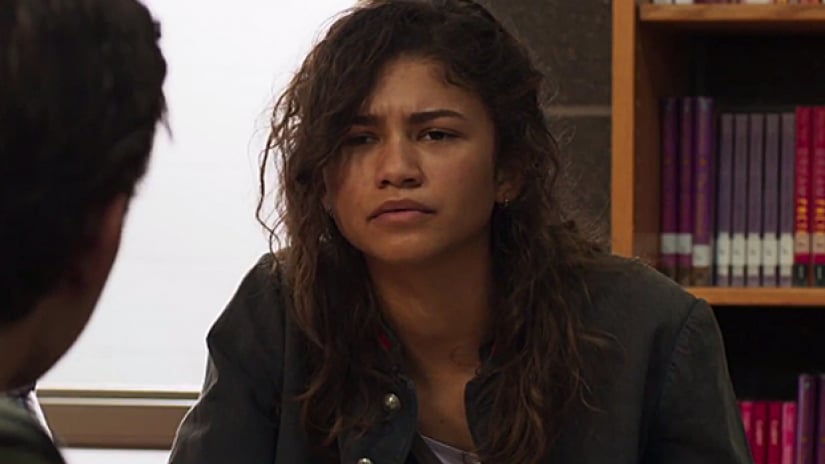 It's the question that's been bugging the internet ever since Zendaya was first cast in Marvel and Sony's joint Spider-Man venture: does she play Mary Jane Watson or what? Now that the web-slinging superhero has made his triumphant return to the silver screen in Spider-Man: Homecoming, we finally have our answer.

*pause to look up drumroll sound effect on YouTube*

Zendaya, the superstar actress, singer, dancer, and fashion designer, is barely in Spider-Man: Homecoming. While the trailers kind of insinuated that Zendaya's Michelle would play a key role in the superhero film (which makes sense since she's arguably the most well-known name in the movie's young cast), her character actually only pops up sparingly. Michelle, who's a quiet genius with razor-sharp wit, appears for 30 seconds at a time, cracking sarcastic one-liners at the expense of "losers" and fellow academic decathlon team members Peter Parker (Tom Holland) and his BFF Ned (Jacob Batalon) before fading into the background of their high school.

She isn't, as many theorised before Homecoming came out, Peter's love interest. Instead, that role goes to Laura Harrier, who plays popular senior Liz, the object of the young superhero's affections. If you combined all of Zendaya's collective time on screen, the number would likely barely crack even 10 minutes. That's not to say that she doesn't make those 10 minutes count, though. Some of Homecoming's most delightful moments come courtesy of Michelle's biting jokes, like when she makes fun of Peter and Ned for attending a "lame" house party Liz is throwing.

"Am I?" she responds while casually buttering a piece of toast (sorry, is that not what you're supposed to do at parties?). Later on, when the decathlon team heads to a competition in Washington DC, she notes how she wants to get there early to get some protesting in and opts out of going into the Washington Monument with the rest of the group because she'd rather not go inside a structure "built by slaves." If anyone is proof of the old Hollywood adage that "there are no small parts," it's Zendaya's performance as Michelle.

While chatting with director Jon Watts about Zendaya's character last Summer, he revealed to POPSUGAR that he sees Michelle as a version of Ally Sheedy in The Breakfast Club and what Linda Cardellini is like in Freaks and Geeks. "It's just a cool character, and it's cool for her to be that character, I thought," he said. "She has a really cool wardrobe, really funny, lots of literary nods." Michelle, who rocks head-to-toe black, little to no makeup, and a messy ponytail, certainly does have that angsty, John Hughes-heroine flair about her, and if the end of Spider-Man: Homecoming is any indication, we'll be seeing a lot more of her.

As the film wraps up, the teacher overseeing the academic decathlon team (a hilariously obtuse Martin Starr), crowns Michelle the group's new leader. While the team happily congratulates her, she tells them thanks and "My friends call me M.J."

She might not bear the exact moniker of "Mary Jane," and we still don't know her last name, but it's an exciting development. In the past, Peter Parker's romantic interests — Kirsten Dunst's Mary Jane in Sam Raimi's early 2000s franchise and Emma Stone's Gwen Stacy in 2012 and 2014's Amazing Spider-Man movies — acted as more of your run-of-the-mill damsels in distress, pretty plot devices there to ratchet up the tension by being kidnapped by Spidey's newest foe. We have a hard time believing Michelle would ever fall into that stereotype.

There isn't a female lead in Homecoming whose sole job is to motivate Peter to be better; the 15-year-old evolves on his own and pushes himself to tackle the burdens of being a teenage superhero (like in one scene where he finds the mental and physical strength to lift a literal concrete wall off his back instead of waiting for someone else to save him). Because of this, both Michelle and Liz get to mostly function as their own, individual characters, complete with personalities and agency.

Since Liz parts ways with Peter at the end of the film, it stands to reason that Michelle (sorry, M.J.) will become an even more important part of the sequel. It would be hard not to be wooed by Peter's web-slinging powers, but let's hope that if they do make her his girlfriend in the future, they also make sure she's his equal.