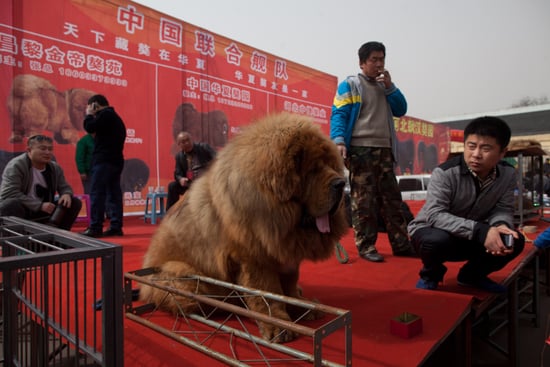 It's been a wild week of animal news. In China, zoo goers are upset after the People's Park in Luohe tried to disguise a dog as an African lion. The pup in question was a Tibetan mastiff, the breed pictured above, whose large size and long hair makes it a decent stand-in for a lion. The plan was working . . . until the dog started barking! The wasn't the end of the attempt to cheat animal lovers out of the $2.45 price of admission. A dog was also dressed up as a wolf, and a white fox filled in for a leopard. Below, you can see video of the deceptive dog.

Meanwhile in South America, researchers discovered a brand-new mammal altogether, which they describe as "a cross between a teddy bear and a house cat." Sign me up. The newly named olinguito travels through trees at night and eats fruit. In fact, just like the dog-lion, this animal was hiding in plain sight at the Smithsonian's National Zoo in Washington DC during the '70s. Zookeepers thought she was a member of a similar breed, the olingos. The newly minted olinguito is now part of raccoon family of mammals — its smallest, and perhaps cutest, member.