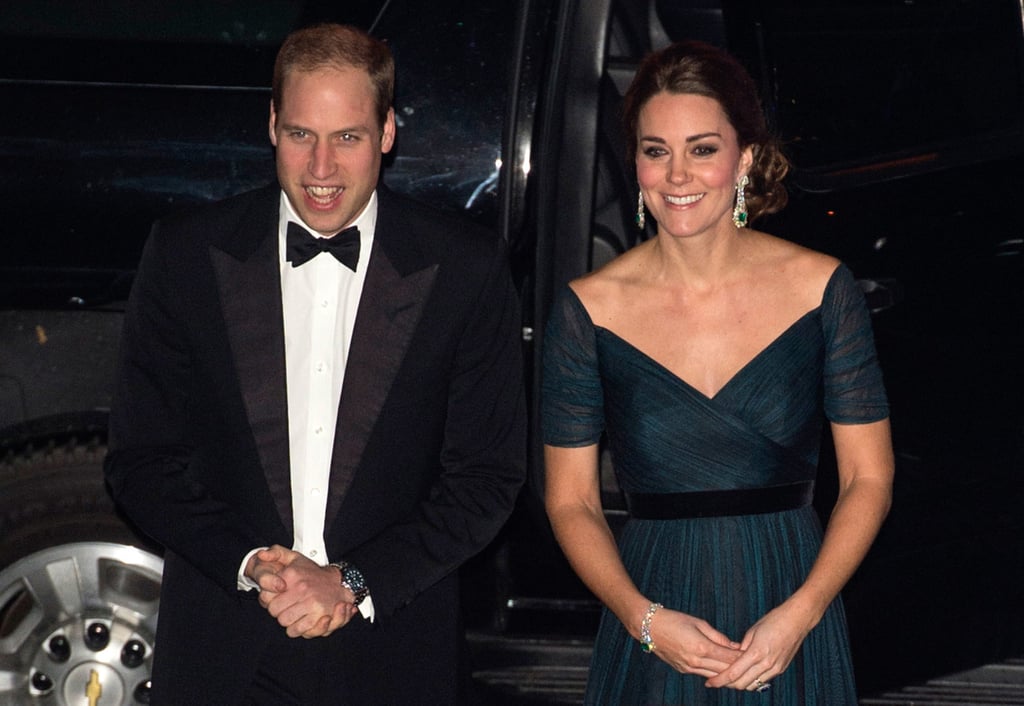 The Duchess of Cambridge put her growing baby bump on display in a navy blue Jenny Packham gown for the St. Andrews 600th anniversary dinner at the Metropolitan Museum of Art in NYC on Tuesday evening. She was joined by her husband, Prince William, who looked dapper in a classic tuxedo. William was quite the gentleman during the event, keeping a close eye on his pregnant wife and leading her down the staircase by hand. If Kate's dress looks familiar, it's because this is the third time you've seen her wearing it — the duchess donned the gorgeous gown in both October 2013 and February 2014.

The St. Andrews soiree — which also brought out Anna Wintour, Mary-Kate Olsen, Olivier Sarkozy, and Prince William's cousin Princess Eugenie of York — supports scholarships for underprivileged students and investment in new sports and academic programs. It also marks the final event of Will and Kate's three-day tour of NYC and Washington DC. The couple met at the university in 2001, and in a letter to attendees, William wrote, "For Catherine and me, it will always be a very special place, and we have the warmest of memories of our time as undergraduates and the friends we made there."

Speaking of friends, Will and Kate have made quite a few new ones during their latest visit to the States; since touching down on the East Coast on Sunday, they've had a sit-down with Barack Obama and attended a reception with Hillary and Chelsea Clinton. The royal couple also got to watch the Cleveland Cavaliers play the Brooklyn Nets at the Barclays Center on Monday night before chatting it up with American music royalty like Beyoncé and Jay Z and rubbing shoulders (literally) with NBA star LeBron James. Tuesday was another busy day for the couple, who braved rainy weather for a visit to the National September 11 Memorial and Museum, where they visited reflecting pools and toured the grounds. They then headed to youth organisation The Door/CityKids, where they fuelled up on fruit snacks before heading to the Creativity Is GREAT event. The always stylish Kate seemed right at home at the fashion-focused function, as she was spotted in deep conversation with J.Crew creative director Jenna Lyons and Marchesa designer Georgina Chapman. Keep reading for more photos of Kate and William's final night in the Big Apple!