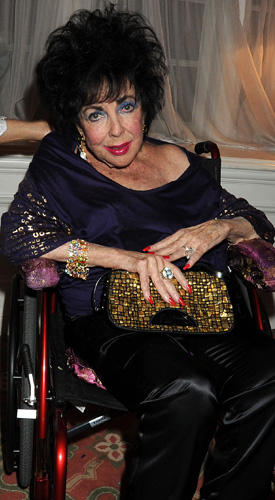 Very sad news is breaking this afternoon as classic actress Elizabeth Taylor has died. She was 79 years old and at the Cedars Sinai medical centre in Los Angeles. She will be remembered as a screen icon and one of the biggest classic Hollywood stars. It is thought that she suffered from heart failure. She is perhaps best known for her work in the '50s and '60s when she won two Oscars and for her famous marriage to Richard Burton which began in 1964.

Elizabeth spent much of her later life dedicated to her Aids charity, which she set up in 1991 following the death of Rock Hudson. She has been ill for some time suffering from congestive heart failure since 2004 having already survived surgery for a benign brain tumour in 1997. She wasn't going to let that slow her down though as she tweeted last year, "No one is going to play Elizabeth Taylor, but Elizabeth Taylor herself. Not at least until I'm dead, and at the moment I'm having too much fun being alive...and I plan on staying that way. Happiness to all." Our thoughts are with her friends and family at this sad time.