Elle's annual Women in Hollywood issue is set to hit the stands on Oct. 22, and it's focusing on the powerful women who are making big changes in the film industry. The newest round of exceptional actresses discuss everything from making films with strong female leads to standing up against conventional expectations for women in the industry. We know these women inspire us, but what inspires them? We're taking a look at a few insightful quotes from this year's big game changers. 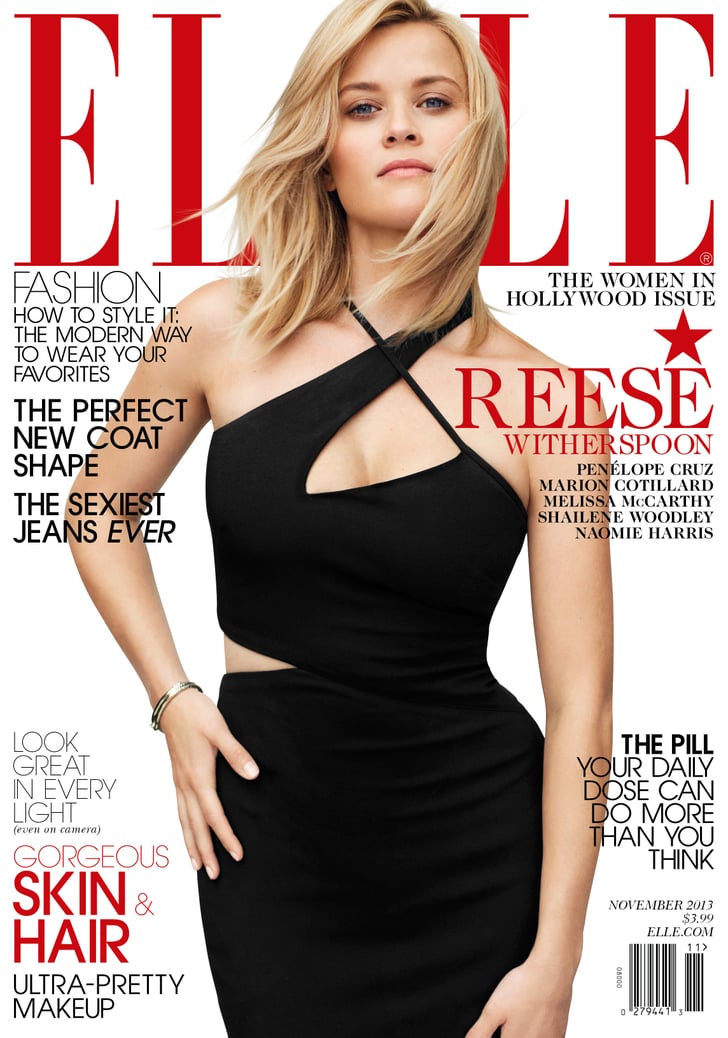 Although Reese Witherspoon has been acting in movies for a long time, she began producing films to push more women into lead roles. "I started noticing a couple years ago that I wasn't seeing women as the stars of movies. I'm seeing them as the guys' girlfriends, or so-and-so's wife. I just thought: God, if I don't start buckling down and start producing some movies, what's my daughter going to see?"

As it turns out, Reese's daughter is a lot more than just her reason for creating a positive role model for young women . . . she's also helped Reese ground herself. "Somebody was saying to me the other day, 'Oh, people get less interesting when they have kids.' I just don't think that's true. I feel like I was so confused before I had kids, I almost got in my own way. Having kids made me clearer about who I was as a woman. I just wanted to exhibit good qualities for my daughter. I was a little competitive before I had kids — probably really competitive, to be honest. It really made me let go of that."

For Shailene Woodley, the representation of women in Hollywood isn't quite as important as her representation of herself. In a world that tends to seem insincere, Shailene is striving to stay grounded. "There's nothing like walking into a meeting and people expecting me to shake hands, and you hug them. For me, a hug is to disregard all of that bullsh*t and be like, This is me, Shai. This is who I am. Now let's talk about real situations. Let's not talk about all this surface-level stuff."

At the same time, though, Shailene recognizes that she still has a lot of growing to do. "I'm so young, and I'm single, and I just want to drift. I'm just going to be a drifter. I want to do something totally different before Insurgent (the second film in the Divergent trilogy). Maybe I'll work in a tea shop. Or live in Amsterdam. Or be a nanny. Life experience only helps us as actors. I need new experiences to draw upon."

See the other two women who have turned into major game changers when you read on.

In Melissa McCarthy's case, it's not just about portraying women as strong, successful individuals, but it's also about endowing them with depth. Melissa wants to show women who have made it to the top but have also worked hard to get there. "A lot of times, women have had all their tools taken away (in Hollywood comedies). It's like you're never inappropriate, you have the greatest job, you look great, your hair is amazing, and now go be funny. And it's like, with what? You have to fall down for us to want to watch you get back up. And it's like they never let you watch women fall down."

And Melissa's not the only woman taking on characters with flaws. When asked about who she enjoys watching as an actress in the comedic world, she said, "I watch Julia Louis-Dreyfus on Veep and she is so good, because she is playing the world's biggest asshole narcissist, and yet you can't take your eyes off of her. In fact, you still strangely like her and almost want to hang with her."

Penélope Cruz is an actress who isn't used to superstardom; plenty of women in the industry are focused on their acting, and many others are simply huge stars. Penélope, as it turns out, is one of the few women who is both: "The concept of a 'star' will always sound foreign and surreal to me because growing up in my country, you're an actor, not a star."

While working hard and taking every opportunity that presents itself seems like the way to go, Penélope also thinks there's only so much one person can do. "Learn to say no. You're going to have to put a lot of your time into a project, and you have to know if it's something you really feel connected with, because it's not a job you can do like you press a button."

Source: Elle
These Women Are Changing Hollywood, One Movie at a Time  originally posted on POPSUGAR Celebrity News
Elle
Around The Web