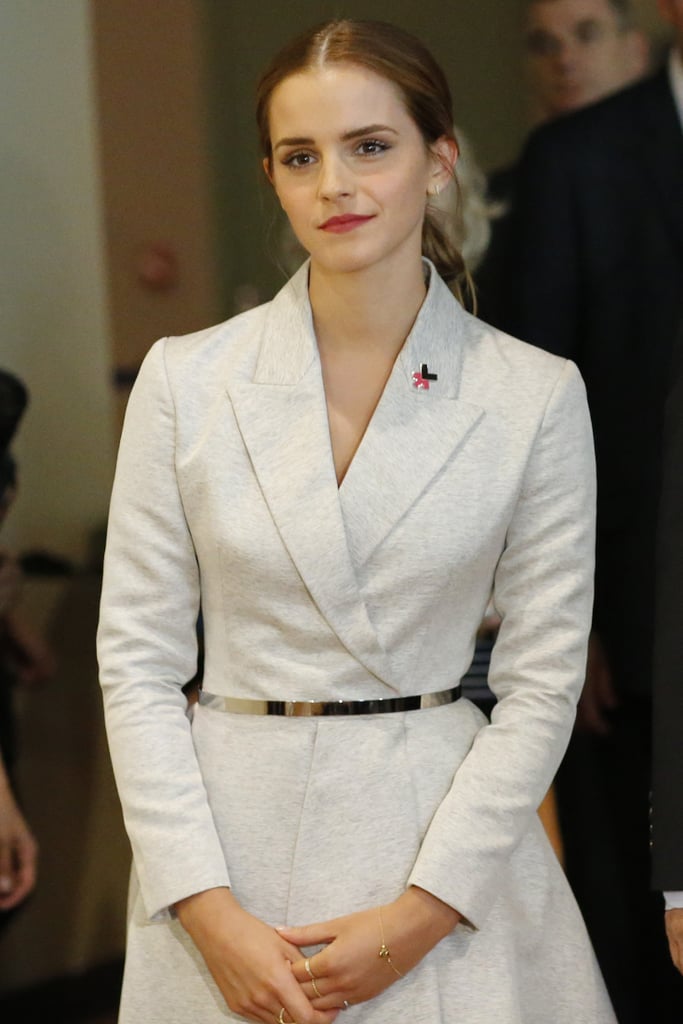 Emma Watson delivered a powerful speech about gender equality at the United Nations in NYC on Saturday. The actress, who serves as the UN Women Global Goodwill Ambassador, took the mic during the HeForShe campaign launch event. "I was appointed six months ago, and the more I have spoken about feminism, the more I have realised that fighting for women's rights has too often become synonymous with man-hating," Emma said. "If there is one thing I know for certain, it is that this has to stop." She continued, "For the record, feminism, by definition, is the belief that men and women should have equal rights and opportunities. It is the theory of the political, economic, and social equality of the sexes.'"

Emma made the speech personal, opening up about her experiences to explain how sexism affects both men and women. "When, at 14, I started being sexualised by certain elements of the press," she said. "When, at 15, my girlfriends started dropping out of their sports teams because they didn't want to appear 'muscly.' When, at 18, my male friends were unable to express their feelings." Emma also drew attention to the high suicide rate for men between 20 and 49 in the UK. "I've seen young men suffering from mental illness, unable to ask for help for fear it would make them look less 'macho' . . . I've seen men made fragile and insecure by a distorted sense of what constitutes male success. Men don't have the benefits of equality, either." Finally, the eloquent actress called on men across the world to take a stand and join women in the fight for change, the chief goal of HeForShe. "Men, I would like to take this opportunity to extend your formal invitation," she said. "Gender equality is your issue, too."

The remarks come nearly four months after Emma graduated from Brown University with a degree in English literature. Ever since, the 24-year-old has been exploring her role as an activist while jugging work. Most recently, Emma joined several stars who spoke out about the massive leaks of celebrity nude pictures. "Even worse than seeing women's privacy violated on social media is reading the accompanying comments that show such a lack of empathy," she tweeted earlier this month. Scroll through to watch Emma's speech, and see pictures from her event, and if you're proud of the inspiring woman the Harry Potter alum has become, get nostalgic with a look back at her incredible transformation over the years.