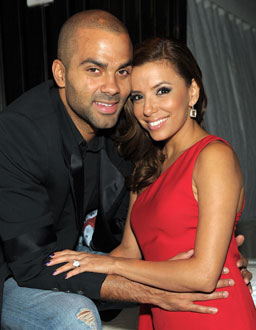 Rumours began circulating yesterday that Eva Longoria and Tony Parker were heading for a divorce, and now it seems to be official — she filed papers today at a LA courthouse seeking to dissolve their three-year marriage.

It was just a few months ago that the couple took their regular anniversary trip to Europe, looking happy as they kissed their way around the continent. More recently, she was solo in Spain to host MTV Europe's Music Awards. He's now in the midst of a new basketball season, while she's continuing to focus on Desperate Housewives. Eva and Tony faced rumours of trouble shortly after their July 2007 wedding, and it looks as though now they've decided to pull the plug officially.