Stars of the awesome Gavin and Stacey — James Corden, Joanna Page, Mathew Horne and Ruth Jones — took to a double decker bus in London for a fab new image in Marie Claire magazine's TV special! Lovely Ruth says in the November issue that her most often asked question is "Have you ever thought about losing weight, because you have a pretty face?", while James Corden named his lucky charm in life as Ruth. 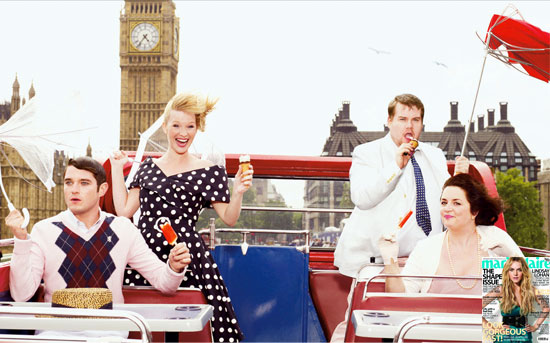 Fearne Cotton and Denise Van Outen are also both featured in the TV special, check out the exclusive video which takes you behind the scenes on their shoot! Denise spilled to the magazine about her most unusual award, saying "Travelodge did a survey to find out who truckers would most like to spend the night with. I was short listed!" Take it as a compliment Denise!