Last night I attended the Chalet Girl premiere at London's Westfield, and managed to catch up with the gorgeous star of the film, Ed Westwick, for a chat. He was utterly charming as I asked him about his upcoming project with Clint Eastwood and Leonardo DiCaprio, and he put rumours he's leaving Gossip Girl to rest. Here's what he said: 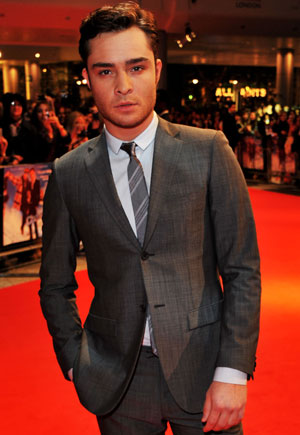 Do you prefer working on TV or movies?
I enjoy both... both are very different, TV moves a lot quicker. Film, you get a lot more time to spend on it. You go from project to project, and then all of a sudden you're at a lovely thing like this.

It's rumoured you want to move on from Gossip Girl, is that true?
That was taken out of context... what I was trying to say was I want to maximise my time so I can work on other projects as well as Gossip Girl. Why would I [want to move on]? I'm having a fantastic time. I've got a great character, a great cast, and I get to live in New York City.

Your character in the film has rock star ambitions, are you still playing music?
I had a band [The Filthy Youth], that was a little while ago, we broke up a long time ago. I just mess around on the side and play music on my own now.

To read about Ed's Valentine's Day plans and what he had to say about J Edgar, just read more.

Do you have any Valentine's Day plans?
No no no, I think I'll probably be working, as it falls on a Monday so... I'll be a bit tied up. I'll be back in the States. I leave tomorrow night actually.

You have J Edgar coming up, can you tell us anything about that?
Yeah, I think we're doing that in March, so I'm very much looking forward to that. Exciting, definitely.

Stay tuned for more photos and chat from the film premiere last night!

Celebrity Interviews
Tommy Dorfman Is Reintroducing Herself: "I Am a Trans Woman"
by Kelsie Gibson 11 hours ago