Whatever you do, don’t tell Fantastic Beasts’ Ezra Miller that you haven’t read Harry Potter:

Every year, thousands of innocent people fall victim to Harry Potter-fuelled "nerd-rage." Triggered by the simple discovery that somebody hasn't read the Harry Potter books or that that they've only seen the movies, nerd-rage is no laughing matter. Symptoms include: mild sweating, an elevated tone of voice, the overwhelming urge to use nearby objects as magic wands, and sudden tears prompted by the phrase "always." If you or a loved one have experienced nerd-rage, you're not alone: Hollywood actor and self-professed "Harry Potter geek" Ezra Miller is a fellow sufferer.

In this video from MTV, Miller exhibits all the symptoms of this common ailment. Give the hilarious, er, powerful clip a watch, so that you know the signs of nerd-rage before it hits. It could save a life . . . or at least a broom. 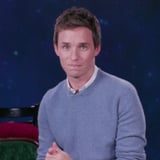