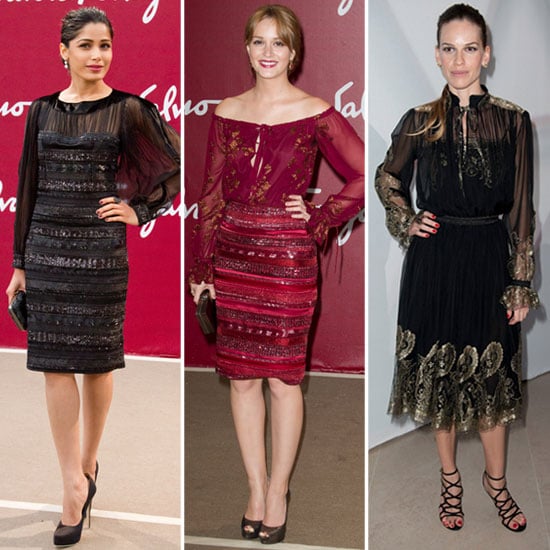 Leighton, Freida, and Hilary Get Stylish at the Louvre For Ferragamo

Stars came out to watch Ferragamo's Resort collection debut during the brand's fashion show held at the Louvre Museum in Paris yesterday. Leighton Meester, Freida Pinto, and Hilary Swank all wore looks from the designer, as did Karolina Kurkova and Virginie Ledoyen. Leighton switched gears to fashion after spending the last few weeks promoting her big-screen project with Adam Sandler, That's My Boy. She stopped by the MTV Movie Awards and Jimmy Kimmel Live! earlier this month to show off the film, which hits theaters Friday. Freida has also been busy with press for her latest acting efforts, and attended the Cannes Film Festival for Desert Dancer. Karolina was also on hand for the glamorous French event and also recently showed her style at the CFDA Awards.

Previous Next Start Slideshow
Leighton, Freida, and Hilary Get Stylish at the Louvre For Ferragamo originally posted on POPSUGAR Celebrity News
Leighton MeesterHilary SwankFreida Pinto
Around The Web