Katie Price and Peter Andre met up yesterday for the first time since her inteview with Piers Morgan aired on television on Saturday. She dropped off their children Junior and Princess Tiiaamii, along with her son Harvey, apparently exchanging very few words. Peter responded to her revelations about the baby their lost in his New magazine column, saying: 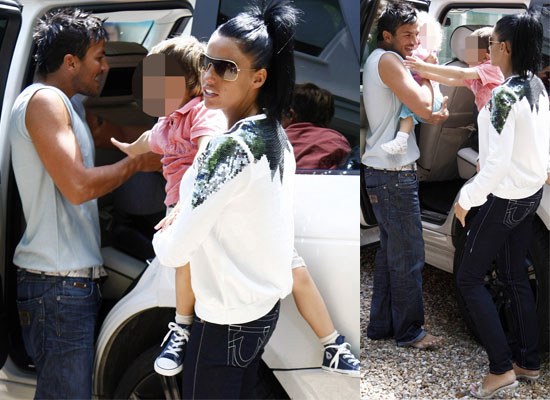 "I had no intention of watching Kate’s interview with Piers Morgan on Saturday night because I’m not interested and I don’t care what she says. However, in the end, I wanted to know what she was going to say about our family so I sat down to watch it with my mum and my brother Mike. By revealing all about the baby we lost, Kate went against everything we said we’d never do.The miscarriage was a devastating time for us both, but I strongly believe it should have remained private. Unfortunately, what Kate says is out of my control. I can’t control what other people do, I can only control what comes out of my mouth."

While Katie recently spoke about Peter's new friendship with Chantelle Houghton, Chantelle has responded, saying: "'We're just friends, there's nothing there. We have the same management - that's the only reason I've been seen out with him. It's crazy to think anything is going on. The stories about us having secret dates are totally made up."