What a night! I've just got back from the BAFTA Awards 2009, so — without further ado — here are all the winners! Slumdog Millionaire had a very successful evening, winning seven awards including Best Film and Director for Danny Boyle, Kate Winslet took home the Leading Actress award for her role in The Reader, while Mickey Rourke made a fantastic amusing speech when he picked up the award for Leading Actor. 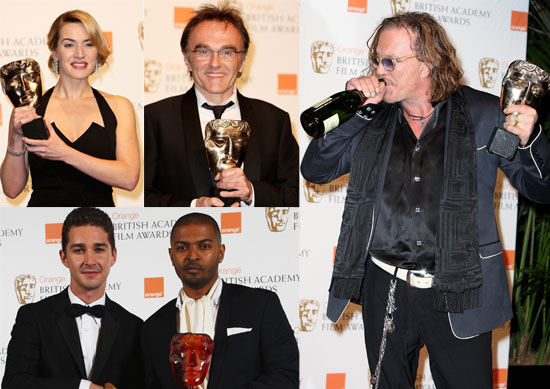 Stay tuned for more gossip and photos from the night itself — and don't forget to vote in our love it or hate it polls — but for a full list of who got what, plus plenty of photos of the presenters and winners backstage, just read more.

Short Animation
Wallace and Gromit: A Matter of Loaf and Death

Make Up and Hair
The Curious Case of Benjamin Button

Film Not In The English Language
I've Loved You So Long