Wow, what a jam-packed episode! It's been quite a wait but Brothers & Sisters is back with the bickering, bonding and banter that I love. This episode picks up a couple of months after Kitty and Robert's engagement party, with matriarch Nora recording a video message for Iraq-based Justin, whom she hasn't heard from for three weeks. 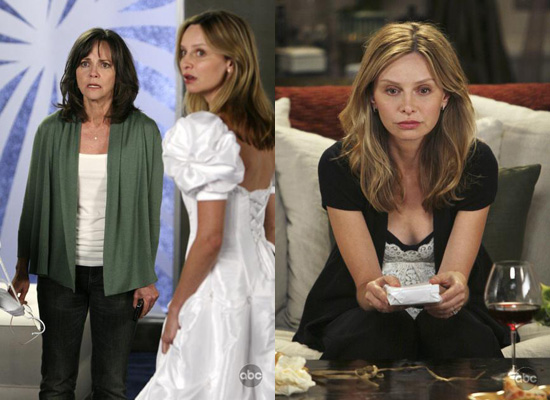 Nora's message provides us with a useful update on where the siblings are at: Sarah, who is separated from Joe, is struggling with the competitive mums in the park; Kevin is busy dating Senator McCallister's brother, the yummy Rev. Jason; Tommy is working on a new contract for the vineyard while Julia is struggling back at home with baby Elizabeth; Kitty and Robert are facing questions about Justin and their engagement during their Presidential campaign interviews; and Rebecca, who is sleeping in Kitty's room and still not talking to Holly, is the only one Nora's seen much.

To get a full recap, and to read my thoughts on this new series, just read more

Kitty returns to the family home for her birthday only to find that Rebecca is flavour of the month with Nora. We're reminded that William died on Kitty's birthday last year, with Kevin saying the first of his many great lines of the episode: "maybe there's a Kitty curse". Kevin is probably my favourite character, with his "die Kitty die" comment during "Game Night" being one of the funniest lines of last series. But I digress ...

Even though they're separated, Sarah and Joe get jiggy with it on the washing machine while Milo turns up at Ojai's offices to give Saul a photo of their Key West trip back in the day. I'm intrigued about where they'll take this storyline — I'd be happy to see Saul get more airtime. We cut to Tommy and Julia's place, where we see how much Julia is struggling with the death of baby William. I really think Sarah Jane Morris is fantastic in this part — she plays it with such subtlety and understatement.

While trying on wedding dresses Kitty gets into a huge argument with Nora (nothing new there then) about not asking Robert for information on Justin, which is filmed by a random and later turns up on YouTube! Sally Field does a great job throughout the episode of portraying the all-consuming concern Nora has for her son. When Kitty speaks to Robert on the phone we learn that she had in fact asked him for info and she presses him again, but Robert still won't budge. Bah.

We cut to Kevin in the bathroom with his boyfriend (hello Jason's body — hoping to see you again soon!), and find out that the Bishop wants to speak with Jason. This obviously does not bode well. Nor does Tommy's tenseness when we cut to him and Sarah at Ojai. She wants a male perspective on the Joe-sex event but he's not having any of it. I think we're going to see Rachel Griffiths really get to take Sarah in different directions this series, which will be great.

Tension abounds between Kitty and Rebecca too, when Rebecca finds the still-wrapped present William gave to Kitty last year. I'm a bit over the problems with these two, and Rebecca in general, but I know I'm just going to have to bear with it. Back to lovely Jason, who is being sent to Malaysia for up to a year. Kevin flips out but Jason gives as good as he gets, saying that Kevin hasn't even said "I love you" yet.

We get our first glimpse of Holly as she lays flowers at William's grave, and Nora appears with the same purpose. They have their little banter but Nora ends up inviting Holly to Kitty's birthday dinner, which Rebecca is organising. The dinner goes disastrously of course — they can't get a table so the siblings are stuck at the bar, hilariously bickering with one another. Kevin is on top form, naturally, and has an interesting spat with Saul who accuses him of not knowing how lucky he is.

Good old Robert turns up to tell the gang Justin is OK — his unit has been out on a mission but is now returning to base. They return to the house for pizza and beers: Julia arrives with Elizabeth; Kitty and Rebecca start to make nice; Kevin tells Jason he loves him; Rebecca lets Holly help her with the cake; Nora gives Kitty her wedding dress; and the gang start dancing (Cooper could challenge Cruz Beckham for his dancing crown!). All is going well, until (there always seems to be an "until" in B&S) ...

... Robert receives a call saying Justin's unit's been hit by sniper fire causing unknown casualties. A little later Nora breaks down while Kitty tries to help her, and when Joe arrives at Sarah's she asks him to move back in but he wants a divorce (what the?!). The episode ends with Rebecca recording a video message to Justin. While I liked the device at the start of the episode, this feels too contrived as Rebecca comments on each family member. We end with Kitty opening William's present to her — a necklace with a "Be Strong" engraving — and Nora sitting helplessly on her bed.

So what did you think of the episode? I can't believe how much they managed to cram into it and I can't wait for the next installment! Share your thoughts with us, whether you've just watched the episode or you've already seen it and you're reliving it all over again with us. No spoilers though please guys ... the suspense is all part of the fun!