Gael Garcia Bernal is one of the celebrities at Cannes this year, and he's been busy talking up and celebrating his new film No. The picture is set in 1988, the year the Chilean people ousted dictator General Pinochet through a democratic vote. Gael plays René Saavedra, an ad man who accepts the potentially dangerous job of spearheading the TV campaign for the people against Pinochet, those who will vote "no" in the election. 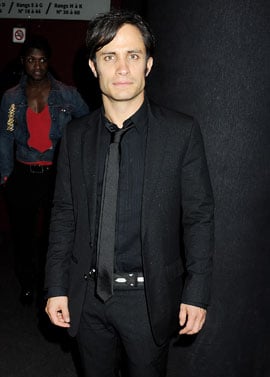 Reviews of Gael's No have been quite good, and both he and director Pablo Larraín confessed to being really excited about the response. Pablo told us he cast the "wonderful" Gael as the leading man in the film because Gael has the mysteriousness to play René, a job that had to carry the whole production. Gael spoke about the challenges of creating a movie based on real events, his plans for a break, and how his career decisions are affected by his two kids, 1-year-old daughter Libertad and 3-year-old son Lázaro. Gael said: