The GQ Men of the Year awards were held in London last night and it was the star studded event you'd expect with guests like Mickey Rourke, Kate Moss, Yoko Ono, Take That, Lily Allen, Will Young, James Corden, Alan Carr, Gemma Arterton and many more! Gary, Mark, Howard and Jason won Band of the Year, and afterwards Yoko complimented the boys, saying, "I love 'Shine'. I know most of their greatest hits. They're a great British band." 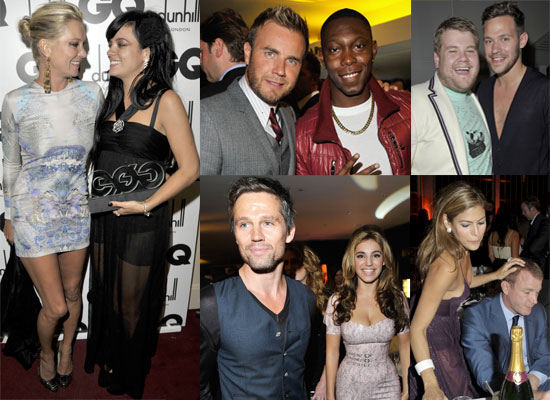 The controversy of the night came as Kate allegedly stormed out of the awards with Jamie Hince after host James Nesbitt poked fun at her! Still, she looked happy to support her buddy Lily who won the Woman of the Year award, while Eva Mendes and Guy Ritchie looked rather close at the afterparty!

To see many more fun photos from the GQ Men of the Year awards and party featuring Take That, Yoko Ono, Mickey Rourke, Gemma Arterton, Daisy Lowe, Pixie Lott, Alexandra Burke, Little Boots and many more, plus a full list of the winners, just read more.