The MTV Movie Awards took place in LA last night, hosted by American comedian Andy Samberg, with the Twilight cast stealing the show for many reasons! Robert Pattinson chose to skip the red carpet, going straight into the venue, while his castmates posed for photos and signed autographs. Then inside they won five awards for the movie, including Breakthrough Male for Robert Pattinson, Best Kiss and Best Movie, while Kristen Stewart dropped her Best Female Performance award while accepting it. Sacha Baron Cohen attended in character as Bruno, flying from the ceiling with wings on his back, and ending up in Eminem's lap. Eminem left the venue shortly afterwards... oops! High School Musical 3 was another big winner, taking three awards, and star Zac Efron presented the MTV Generation award to Ben Stiller! 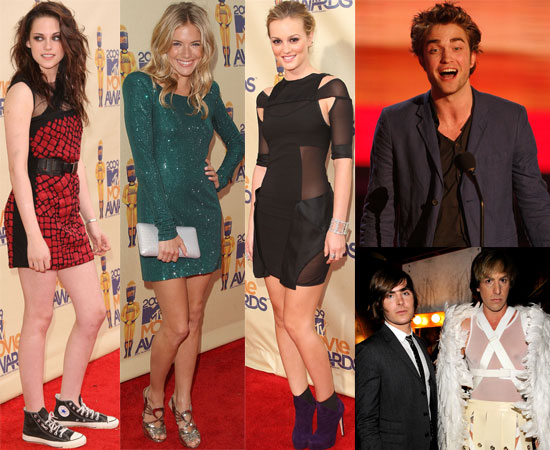 Don't forget to check out all our Sugar Network coverage on the MTV Movie Awards, and to see a list of all the winners, as well as a huge gallery of photos from inside and outside the ceremony, just read more.

BEST SONG FROM A MOVIE
"The Climb" — Miley Cyrus, Hannah Montana: The Movie