Los Angeles played host to the Spike TV Scream Awards last night, attracting a cavalcade of stars from those movies and TV shows that deal with all things supernatural. Taylor Lautner attended to pick up the Breakthrough Performance award for his role as Jacob Black, while unfortunately his costar Robert Pattinson couldn't attend to pick up the Best Fantasy Actor award. Megan Fox picked up the Best Sci-Fi Actress award, while True Blood's Stephen Moyer and Anna Paquin — who are a couple on and off screen — won Best Horror Actor and Actress awards respectively. Other presenters and guests at the awards included Johnny Depp, Kate Bosworth, Harrison Ford, Eliza Dushku and Justin Long. It looks like a fun night! 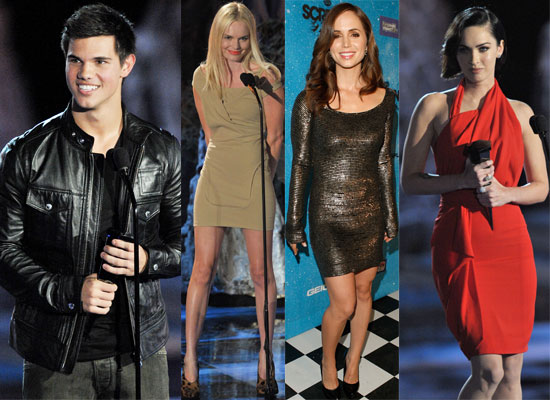 To see more photos from the red carpet and stage of the Scream Awards, just read more.