Robbie Williams made his live TV comeback on The X Factor this weekend, enthusiastically performing his new single "Bodies" on the results show. Saturday night's programme included clips of Robbie mentoring the final 12 contestants, and on Sunday Robbie arrived at the studios in a striped t-shirt and blazer with his girlfriend Ayda Field. As he left his evening was thrown into chaos when the car he was leaving in ran into a photographer. A visibly upset Robbie apparently jumped out of the car and was taken home in another vehicle, police have said the man suffered only minor injuries. Robbie's mentoring went well for all of the performers, except Kandy Rain, who were the first act to leave the show last night. 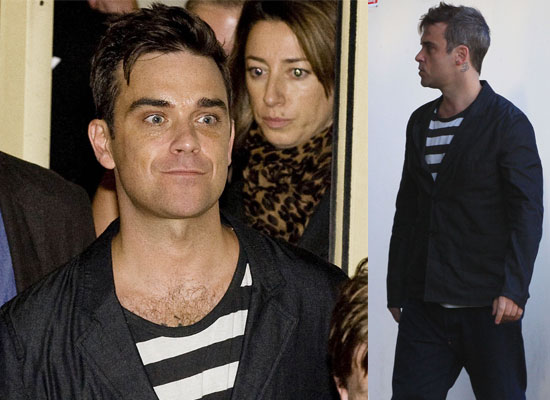 To see more photos of Robbie at The X Factor studios and mentoring the contestants, as well as his performance of "Bodies", just read more.