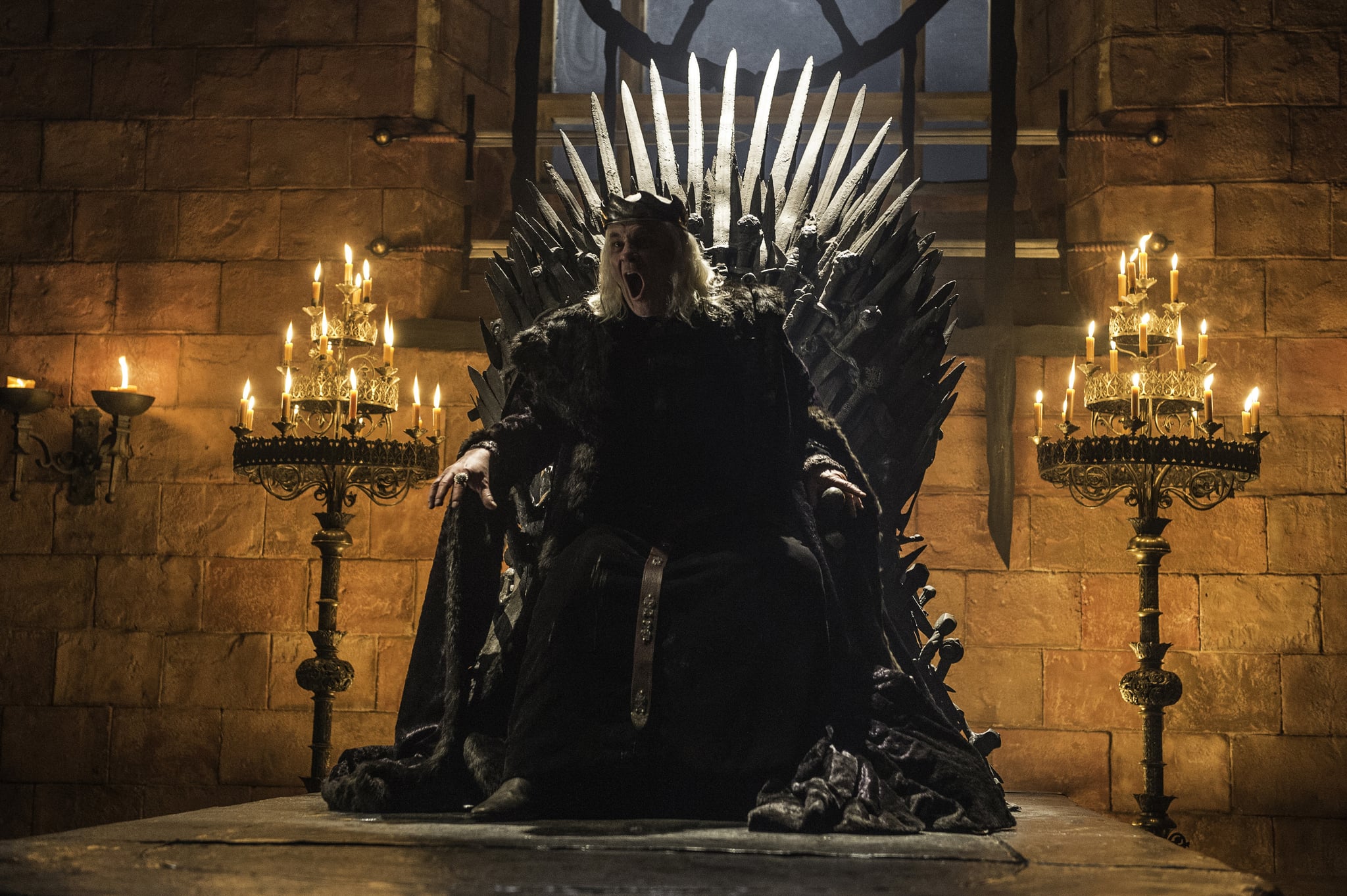 The internet lost its collective mind on Monday when Bran had yet another time-travelling vision — this time featuring the "Mad King" we've heard so much about over the past six seasons. The stressful cacophony of jumbled-together flashbacks swapped between various events in Westeros's history, including Ned Stark's beheading and the Red Wedding, revealing a whole lot of information in a very short amount of time. But it seems that the order of these visions was intentional; there was a connection so quick that you might have missed it, but it contained a potentially huge revelation about the entire Game of Thrones plot.

Daenerys Targaryen's dad, the Mad King Aerys, is shown screaming his famous line, "Burn them all," from his seat on the Iron Throne. This might not stand out as unusual, except that in Bran's vision, the Aerys flashback is continually sandwiched smack-dab between cuts of White Walkers and King's Landing pyromancers preparing stocks of Wildfire. This fits with our knowledge of the slain king's story, of course, which Jaime Lannister describes to Brienne of Tarth during their famous bath:

"Aerys saw traitors everywhere, so he had his pyromancer place caches of Wildfire all over the city. Beneath the Sept of Baelor and the slums of Flea Bottom. Under houses, stables, taverns, even beneath the Red Keep itself . . .
Then he turned to his pyromancer. 'Burn them all,' he said. 'Burn them in their homes. Burn them in their beds.' . . .
First, I killed the pyromancer, and then, when the king turned to flee, I drove my sword into his back. 'Burn them all,' he kept saying. 'Burn them all.' I don't think he expected to die. He meant to burn with the rest of us and rise again, reborn as a dragon, to turn his enemies to ash. I slit his throat to make sure that didn't happen. That's where Ned Stark found me."

Jaime's account of the Mad King's actions certainly holds true based on Bran's flashbacks — but what if the reasoning behind them was misinterpreted? Since it was revealed (through Hodor's tragic storyline) that Bran is able to change the visions he sees, it's been a popular fan theory that perhaps the Mad King was driven mad by "whispers" from Bran or the Three-Eyed Raven. Based on this vision's placement between White Walker invasions and Wildfire, it seems like the show is very close to confirming that the king's obsession with "burning them all" stems from a well-intentioned hint from a friendly neighbourhood greenseer.

The internet agrees — many believe that this deliberate scene placement indicates something more beneath the surface.

Comment from discussion [EVERYTHING] Shot by shot breakdown of all of the visions.

Within a short minute of showtime, the flashback convinced a whole new group of fans to believe the theory about time-"warging" causing Aerys to descend into madness, much like Hodor was permanently damaged by hearing voices telling him to "hold the door" as a teenager.

An even more convincing aspect of the theory, though, is the belief that the Three-Eyed Raven was actually a legitimised Targaryen bastard named Brynden Rivers.

If this theory proves true and the Three-Eyed Raven's lineage is Targaryen, then he may have tried to warn his family of the dangers beyond the Wall . . . only to realise that no good can come from meddling within his visions. This would explain both the Raven's cautions to Bran during their training and the Mad King's descent into madness.

We already know that fire is one way to kill wights, so stocking up on Wildfire would probably prove effective if the White Walkers brought their undead army to King's Landing. But since King Aerys had already gone a tad crazy, it's not surprising that his screams of "burn them all" and ridiculously dangerous stockpile of magical flames were unsettling to everyone who encountered him. After all, Wildfire doesn't stop at killing wights.

We're sure to get more information about the Mad King in future episodes, but it certainly seems that the Game of Thrones writers are going the fan-theory route with his storyline. Plus, if somebody doesn't take care of the White Walker problem soon, there might be a need to "burn them all" after all.